Lots of whining on the Husker Board
About how badly we treated them, supposed throat-slashes by our players, plate stomps, etc… and the way we mistreated the bird-flipper in LF.

They want to make a big deal about how they are not going to support us in Omaha, they will rag us mercilessly, blah, blah, blah….

Actually, I think our guys would thrive off that. They have kicked a** on the road all year

I keep flashing back to the South Carolina series when the SC students were all over Robert Moore, calling him Oompa Loompa, etc. Then he hit two bombs, the second one about 450 feet, capped with an epic bat flip. Ooompa Loompa that, %$%^%^!

If you don’t remember, wait for the second homer here. 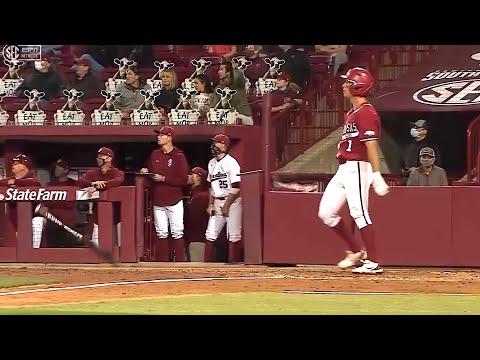 Don’t know if some Husker fans were treated rudely, nor if there was some chirping going on among players. But, either way, I’ve never been a big fan of the plate stomp. I can see why others wouldn’t like that.

Bubba (radio color man) was getting on to Nebraska players all weekend for their attitude. Understanding that Bubba might be labeled a “homer”…

Yeah we certainly didn’t like the plate stomp that Nebraska did the night before. I think Moore’s stomp was a retort to that. We usually have fairly muted celebrations compared to a lot of SEC teams. Ole Miss players do more posturing as a team and individual than most NFL teams do after a touchdown.

Not sure who started the plate stomping or whether it goes back to other games, but they had one of their own early in the game that I thought was a little obnoxious. I was thinking ours was a reply to theirs.

Yeah, I thought the same… ours was a reply to theirs.

But, if theirs is obnoxious, how can ours not be the same? Just, personally, not a fan of it, regardless of the justification.

Oh ours was definitely obnoxious, and I agree it looked bush, but then I am getting old and don’t want those damn kids on my lawn anyway.

I guess some see this stuff as intensity or emotion and others may see it as “in your face” or “hey look at me”. I realize I am out of touch with the kids today and their wanting to share their every move with the world, and know that my old school philosophy of acting like you’ve been there before is outdated, so guess I just hope that my Hogs maintain a little self-restraint while having fun at the same time.

Thats exactly what Moore was stomping for,This is our Field! how dare you come stomp on Home plate! that’s what the message he was sending with his Plate stomp.Loved it!

Moore stomp was definitely pay back for there stomp, series was intense, they stomped 1st, I’m 60 years old and personally it got me fired up… loved it

I’ve been to countless Razorback games in A LOT of sports and I rarely see our fans go after other fans or players UNLESS they do something first to antagonize our fanbase. I’ve seen the rare occasion that some drunken frat boys just go off and curse the whole game at someone like John Calipari for no reason(it is John Calipari, but still) or if a kid from Arkansas is playing for the other team like Malik Monk, but those are exceptions. If our fans were giving Nebraska players the business, then one or more of them did something to antagonize us and I don’t feel sorry for them. I’ve watched documentaries about different teams in different sports talk about how awful Nebraska fans are to opposing teams. Maybe they’re just mad that they got a taste of their own medicine and got their arrogant butts whooped.

As for their fans heckling us if we make it to Omaha, who cares? Bring it on!

That’s right Youda, Moore just giving a little payback. There’s a lot more belligerent stuff goes on and said in these games than a plate stomp.
Geeze a husker batter strikes out and decides to stare down Kopps. He had his antics just backwards

What is this throat slash they all keep whining about? Guess I missed one of our players doing the throat slash.

We will have more fans than anyone in Omaha… scream whatever you want at the Hogs, this team turns it into fuel for aggression.

Unless it was off camera, there was no throat slash. That is the one gesture I hate the most. Far more than the bird even. I saw no Hog do a throat slash. Maybe some Hog gas did one after too many….but no player did. I suspect DVH would. It tolerate that.

As I have said on this board before, LSU fans overall, and Kentucky basketball fans are the worst in our conference. By far. I will say Miss State is the most obnoxious. I hate the cow bells with the heat of a thousand suns.

Moore was definitely stomping on home in response to the Nebraska player.

I saw the throat slash from a fan in the Pen, but that was the only instance I saw.