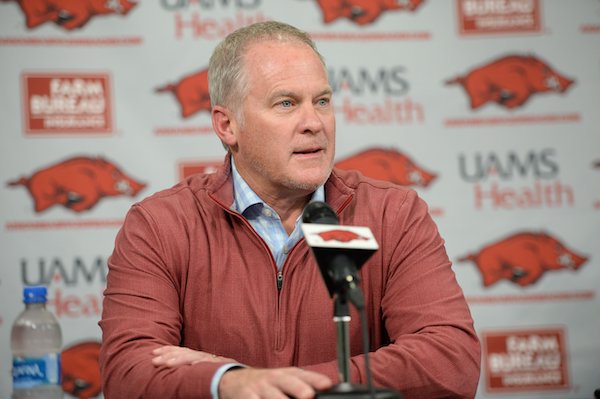 University of Arkansas Athletics Director Hunter Yurachek has signed a contract extension through 2027.

I am glad. I haven’t agreed with everything he has done (isn’t that always the case?) especially the play ASWho thing, but clearly he is doing a good (great probably) job.

Well deserved. Just about all sports on campus have improved under his direction. Now, if he can get at least the same percentage (47%) increase for Sam ($3.75M to $5.5 M+ bonuses), I’ll bet all sides will be happy.

Muss keeps proving whatever we pay him ain’t enough, and there’s a blueblood (Louisville) already with a vacancy. Better lock him down some more.

Naw. Louisville would be a step down.

It would, but they also might throw 7 or 8 million reasons at him to think otherwise.

I think Hunter will stay for awhile. He’s got it rolling.

This extension had been in the works for some time. There was a delay when Joe Steinmetz resigned as chancellor last year.

He is the first Arkansas AD to be guaranteed seven figures per year. Jeff Long made $1.37 million in his final year as AD, but that was after several benchmarks triggered bonuses.