Arkansas athletic director Hunter Yurachek cleared up a few things, but admitted that the decisions effecting spring sports on SEC campuses are still fluid. What might be the case at 9 a.m. today might change at noon. He said that was the case every day this week as decisions were made, then changed related to the coronavirus.

Yurachek was the guest on the Morning Rush radio show Friday morning at 8:40 a.m., so that’s the timeline for what he said was the case at that point in the day.

On spring football, Yuracheck said that is the one area that SEC commissioner Greg Sankey gave schools “autonomy.” At least for the moment, those decisions are in the hands of each school. Yurachek seemed to think spring football on the Arkansas campus would be held.

“I can’t tell you anything for sure right now,” Yurachek said. "I am meeting with head coaches later this morning. There are also university groups meeting concerning the health and well being of our students.

“So it’s a very fluid situation (with spring football). The best case scenario – or at least one that could happen as of now – is that we would begin on schedule on Monday, practice for a week, then take a week off for spring break.”

Yuracheck said what would happen after spring break would be up for consideration, since football players would scatter across the country.

“It might be that we return and take two weeks off,” Yurachek said. "When they scatter across the country, things can get hairy.

“But we have been given autonomy among conference members to make a lot of decisions on workouts.”

That would be for football and other spring sports like baseball and softball.

“It’s yet to be determined what we will do with those spring sports as far as training,” he said. “It’s the right thing to do but what we decide at 9 a.m. may change at noon. That’s how fluid it is right now.”

Yurachek said the overall goal is to just make sure “we are taking care of our student-athletes because they are dealing with things they have never had to deal with. We are not sure how to help them when you think of seniors who may have played their last game. We are trying to take care of them mentally.”

As far as extending a year of eligibility, Yuracheck that would be his wish, but there are problems.

“Absolutely, I would,” he said. “But we will need some help with legislation to expand roster sizes because we have incoming freshmen. We might need a larger roster size for a year.”

Yurachek said it’s all been difficult to work through for all athletic directors.

“I’m not a medical professional,” he said. “So you are trying to make decisions based on third party medical knowledge.”

That’s what was going on with SEC leaders in Nashville at the conference basketball tournament earlier in the week.

“And, it was changing so fast,” he said. “We’d make a decision, produce a press release and then it would change every hour.”

Would he like to see student-athletes stay on campus for spring break?

“Parents need to jump in,” he said. “We do have a controlled environment here. We do a great job of cleaning and that was even before we had the coronavirus.”

Yurachek said he was “disappointed” in the NCAA decision to cancel the spring sport championships so quickly.

“As the AD at Arkansas, I know as much as you do as to why the decision was made in haste,” Yurachek said. “I found out about the press release (from the NCAA) when I landed in Fayetteville. I was really disappointed how a decision was made for sports that would be decided in May and June.” 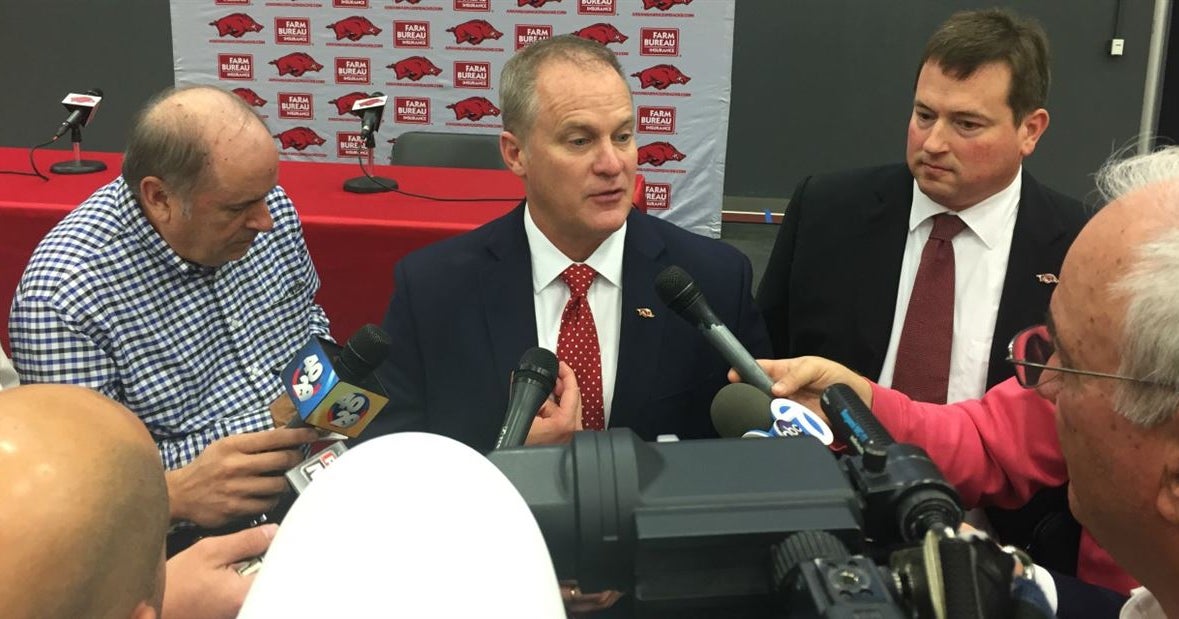 Hunter Yurachek is not happy with the way the NCAA handled the cancellation of spring tournaments.

Very good article article… I agree with him that was one thing I had a hard time understanding was why they would cancel something that would be played in warmer weather right now.

Hunter answered a lot of questions for me without even asking. There are still more but he gets it.

I think its ridiculous if they lets these students and athletes leave NWA for Spring Break and then allow them to come back to campus. If we are truly fighting the spread (up for debate) then send them home for good until summer or fall. It makes absolutely no sense because you have no idea where these students will go or who they will come in contact with outside of state. It is really counterproductive to what they say they’re trying to accomplish. Are they really trying to control the spread?

What I think most will do is go home where their parents can watch and care for them and keep them from harm’s way.

The schools are probably hoping the athletes go home. If there are no organized practices, meetings and events on campus, there is too much to do there. The best place for athletes in many cases (but not all cases) is for them to go home.