We were invited to tour the Hunt Baseball Development Center today. It’s hard to describe, but I gave it a shot: 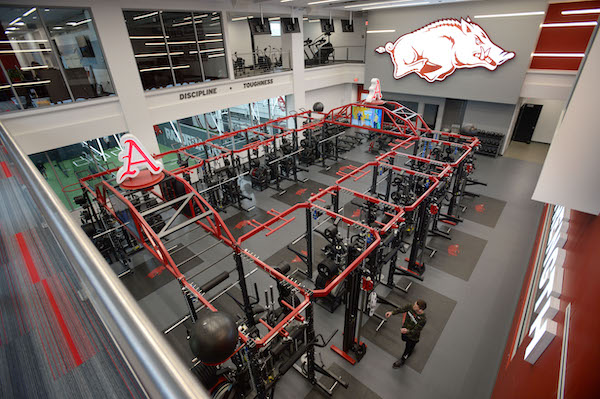 Arkansas baseball coach Dave Van Horn had a palace, but needed to learn how to efficiently show it off.

I was glad to learn that CVH is a Chiefs fan

I think DVH will get his 17,000 seats eventually. Which probably means either seating in/over the Hog Pen or a second level behind home plate. Or both.

He grew up in Kansas City.

I know, Still glad to hear it.

I think DVH will get his 17,000 seats eventually. Which probably means either seating in/over the Hog Pen or a second level behind home plate. Or both.

I think both will be considered long range. The pond beyond the center-field wall can also be drained and filled in, and some things can be done to reconfigure the batter’s eye and add seats there. I was talking to someone yesterday and they said the new building taught them two things: there is a lot of room between the outfield wall and 15th Street, and it was amazing to see how dirt can be moved in a building process.

I have heard that essentially each time the stadium was expanded, it was done so in a way that allows for future renovations. I’m not an engineer, obviously, but I would think a second level could be built over the existing suites. It could address the demand for more suites, more ticketed seats and a new press box.

The press box is essentially the same as in 1996. There are a lot more people who need in there now from reporters to game-day operations people, not to mention the need for a per-game TV booth that did not exist until less than 10 years ago.

I’m not an engineer, obviously, but I would think a second level could be built over the existing suites

Yep, that’s the more expensive, but more likely option, because it would provide premium seats and suites and address the press box need.

I’ve thought for a while that our next major expansion would be premium seats/suites above the current ones. I doubt that would add many seats, but would certainly provide nice revenue. I’d love to see us average something above 15k attendance in a stadium that could hold 17k. To keep this monster, we have to feed it. My only worry is eventually having to replace DVH. Hard to imagine a better coach.

My guess is that an upper deck at BWS would have general seating with a rim of suites/club seats and a new press box above/behind it, and the current press box would be converted to suites

I think DVH wants to cement his legacy by winning a NCAA championship. Once accomplished, he will retire, but stay active in razorback baseball.

Bite your tongue. CDVH still has at least six to eight more years.

If he happens to win the title this year, he’s not hanging it up. He’ll see how many more he can win.

He is going to coach at least 8 to 10 years longer. He’s at the top of his game right now. Recruiting is going great.

Hence why I’m not an engineer.

yes I agree unless an unforseen illness arises,he’s is Great shape to last a long time!

The Hunt center was brought to its knees today by a monstrous blast off Bohofren’s bat!!

Everybody is going to be shooting for that building!!