How many do we get back

for the Mizzou game Saturday?

Great question. Probably will not know until Sat

Coach said about the same roster for this Saturday as last Saturday, or that’s the way I took it from the article.

The depth chart they released today had everyone back.

Pittman said Arkansas might get a player or two back, but also indicated there might be some additional ones out due to injury. He did not give names.

Overall it does not sound like Arkansas will carry many — if any — more players on its roster this week than it did against LSU.

It’s also worth noting that Missouri had a low roster number (52) for its game against South Carolina. I would think both teams are going to have to do really well in testing this week for the game to be played as scheduled.

Matt…I may have missed this somewhere so my apologies. Is the process the same for the players in that it is a 10 day quarantine period and could be back by Wednesday or Thursday? If so, wouldn’t more be available or they wouldn’t be because of not practicing?

I don’t know if they announced anything previously, but Micahh Smith, the reserve senior DB, was on the sidelines Saturday morning, using crutches and wearing a big leg brace. I’m not sure he was playing much, but he sure looked like a guy who is done for the year.

A positive covid-19 test requires a 10-day quarantine. The issue is that most of the players are being held out due to contact tracing, and I think that quarantine is 14 days to allow for the incubation period.

I think most of the players in quarantine for the LSU game are also going to be out for this week’s game because the positive cases did not arise until testing the day after the Florida game. A player who was identified through contact tracing on Monday of last week would not be eligible to come back until Monday of next week.

Smith had season-ending surgery earlier this month. I don’t think anyone has said what kind of surgery, but the brace made it look like it was something to his knee. 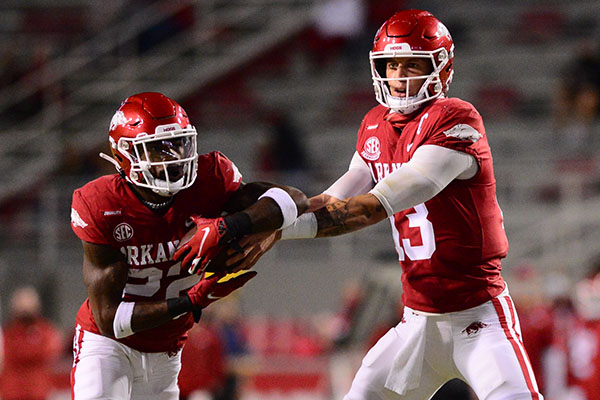 Focus on run begins to pay off

The emergence of a more potent running attack for Arkansas has had an effect on the unit’s overall production.

Matt is right. Almost all the players were in the 14-day group for contact tracing.

So now that we’re not playing Misery (yet), those players who were tagged on the Monday after Florida will be back for Bama (assuming that game isn’t moved). But the others we lost that were available for LSU will be back for Bama if they tested positive, but not if its contract tracing. Confused?

And, that does not mean the spread of the virus stops within the team. There are no guarantees the Hogs will play next week. There are some out with contact tracing that may eventually be positive, then you look to see who they were in contact with on the team.

Well, you would hope those in quarantine due to contact tracing haven’t been around other players.