How does Aubie get out of the Harsin mess?

If Florida State, one of the most prominent brands in the sport for three decades, can tailspin despite playing in a largely mediocre conference imagine what could happen to a rudderless Auburn program in a division with Nick Saban, Jimbo Fisher, Brian Kelly, Lane Kiffin, Mike Leach and Sam Pittman. Not to mention annual dates with reigning national champion Georgia.

On second thought, forget FSU. Late Bret Bielema/Chad Morris-era Arkansas comes to mind as a realistic fate if Auburn fires yet another coach and then botches the replacement.

From this article (paywall). 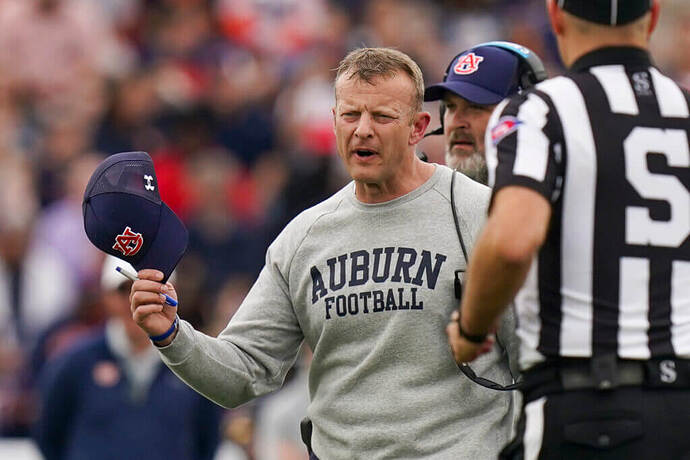 Mandel's Mailbag: How does Auburn get out of this messy Bryan Harsin...

Why doesn't Colorado get the same doom-and-gloom as Nebraska?

I noticed that too. Problem is, he’s right. That’s exactly what happened.

But he also places Pittman in with the group coaches he has to beat. That right there says we have a coach!

Hope they flounder for a while…and we need to start beating them while they’re down.

I think they are boxed in with no good way out. Just breaks my heart. Let the era of Aubrun irrelevance begin!

They have some big time boosters but will they open the old checkbook up and write a 9 million dollar check in the next 30’days to get rid of another coach? They are already paying the Gus buyout! Now they would have to pay a new HC and these other 2 they are paying not to coach. Sounds like a good place to get a job and hope to get fired in the first year! Sign em up