How about 71 yarder by Cam Little?

That’s what I recall from watching it on TV, that the wind was pretty significant. The WaPo story also reported how the EOE winning drive went against the wind, meaning it was south to north, and the Fallopian QB (who started the season as the third-stringer) completed three key passes on the drive.

After McClard left and before Steve Little arrived, we didn’t have a scholarship kicker that I remember. QB Mike Kirkland would come in with a kicking shoe and pull the toe up with a band around his calf to kick field goals.

Kirkland, as I recall, was recruited as a QB/K; he had kicked in high school. That experiment clearly didn’t work and led to JFB going hard and heavy after Steve Little to come on board for the 1974 season. That strap around the calf was fairly common to keep the toe pulled up; my high school kicker, who was a starting WR, used the strap.

Kirkland, as I recall, was recruited as a QB/K; he had kicked in high school. That experiment clearly didn’t work and led to JFB going hard and heavy after Steve Little to come on board for the 1974 season. That strap around the calf was fairly common to keep the toe pulled up; my high school kicker, who was a starting WR, used the strap.

For those old enough to remember this annual competition, Mike was a former “Punt, Pass and Kick” champion when he was 10 or 11 years old.

As an aside, I used to love to watch it when they used to show the kids throwing the ball during halftime of NFL games…back when halftime wasn’t a studio show. Crowds would really get into it when some pee-wee dude would throw the ball 45 yards downfield. These events usually happened later in the year and through the playoffs.

I’ll be a lot of posters here even tried out at their local PPK competition back in the day.

So did Andy Reid; there’s video of him competing at halftime of a Monday Night Football game in 1971 at age 13, a head taller than everybody else. And the ABC graphics misspelled his name. 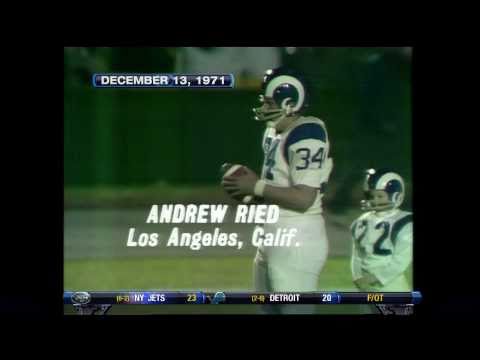 Don’t think he had the 'stache yet, but it’s hard to see under that facemask.

So did Andy Reid; there’s video of him competing at halftime of a Monday Night Football game in 1971 at age 13, a head taller than everybody else. And the ABC graphics misspelled his name.

Yeah…Reid’s the one most everyone knows about…that story’s been out there for a while now.

Not competing in this is one of my longer-term regrets. I was NOT a good athlete, at all…but I loved football so much that I was pretty good at the skill aspects of the game. By the time I was a HS senior, I could throw a regulation football 55 to 60 yards (depending on the day and how I felt), and I made a 52 yard field goal (was consistent from 42-45 on in). I also punted the ball 40 to 55 yards, depending on technique on the given kick.

All of those “skills”, by the way, were the product of emulating my Razorback heroes of that era…Jon Brittenum, Bill Montgomery, Bill McClard, etc.

Again, that was as a junior-senior in HS. The ages for the PPK ranged from 6 to 15, in 2 year brackets. I’d have probably had my best chance to advance competing as a 12 or 13 year old…but I’ll never know. I didn’t know where to go and Dad didn’t think it was enough of a priority to find out for me. Of course, this was long before the internet and easy access to that kind of information. Now, he was at all of my team’s games…but he thought the PPK thing was frivolous.

As I remember, Ford Motor Company sponsored PP&K at the time I was that age and local Ford dealers would promote the events in their town; then there were regional and state competitions. Eventually if you advanced far enough you’d get to compete at an NFL game like Andy did.

One more thing about Andy: As seen in the video, the kids were given replica uniforms to wear for the TV competition. But Andy was too big for their replicas. So they actually got a real Ram player’s jersey for Andy to wear, belonging to running back Les Josephson.

Pepsi wound up as the sponsor before the NFL finally shut it down in 2017.

As I remember the scoring, distance and accuracy were emphasized. If you threw the ball 50 yards but it was 5 yards off line, you’d get a score of 45. Same for punting and kicking (a kickoff, basically), and the score was the total of the three event scores.

My dad didn’t take me to see Michael Jackson in 1984. Still mad about that, although Grandpa didn’t take him to see The Beatles in 1964 either.

I did PP&K every year also, but was unfortunate enough to have to compete with Steve (Bud) Cox every year. 2nd place I had mastered tho,lol.
Could hold my own with him punting & passing but unless he shanked the kick off (which he didn’t) I got all the 2nd place trophies.
We also played peewee & pony league baseball on same teams. Competed against each in basketball all through school. Darn good athlete

It was at least a 20 mph wind on Little’s record kick. Wind was gusting that day.