As this decision is critical at this historic low point, where we want someone who knows our DNA, and when we might not want risk going with young up and comers…

Oh come on please. If HDN was a great coach he would have been hired after Ole Miss. He’s a good coach - we need a great coach.

Not sure if serious…

Give the man credit: Won the SEC West three times? Anyone else for Arkansas done that?

But this decision is so important at this moment I can see us going with someone older and more experienced than an up and comer who may not have seen the big time much.

You really think HDN could sell more tickets? Half the fan base despises him, he isn’t getting hired.

I can’t get past HDN’s 0-15 record against SEC teams to finish his final 2 years at OM. He did well with Orgeren’s recruits, awful with mostly his own recruits. No thanks

HDN has become somewhat, somewhat rehabilitated in the hearts & minds of fans. That’s how it ought to be. Under no circumstances should we re-hire him as coach. And it’s NOT going to happen; I don’t care what kind of odds betonline gives it.

I think Danny Ford won one of those titles and Houston won two. Sadly that seems ages ago now!

think Danny Ford won one of those titles and

Let’s not reopen old wounds & renew the polarization that existed during the HDN days.

Now, when did Saban go to Bama…

Saw the press conference where Nutt announced he was leaving Ole Miss. They paid him $6 million to get out of Dodge remember. He was winless that year in the SEC (great experience and testimonial for being a U of A coach). He whined about how on one could recruit to Ole Miss. If he feels that way about Ole Miss, how can he recruit to Arkansas. I don’t want the Nutt Case (or Used Car Salesman, which ever you prefer), not now, not ever.

Houston spoke to the Alabama booster club in Tuscaloosa last night. They call it the Red Elephant Club. I guess he’s making the rounds this fall trying to pick up a check here or there. He told stories about Bear Bryant recruiting him and did a Bear impersonation. He also told Broyles and Holtz stories. I’m told he was very good. I am not sure about the tan and rested part.

He whined about how on one could recruit to Ole Miss. If he feels that way about Ole Miss, how can he recruit to Arkansas. I don’t want the Nutt Case (or Used Car Salesman, which ever you prefer), not now, not ever.

Ole Miss has to be one of the most difficult teams to recruit, especially with nearby GA, AL, & Auburn picking up the best MS recruits. Even Norvell gets most of his recruits out of MS. UofA is a much easier sell. 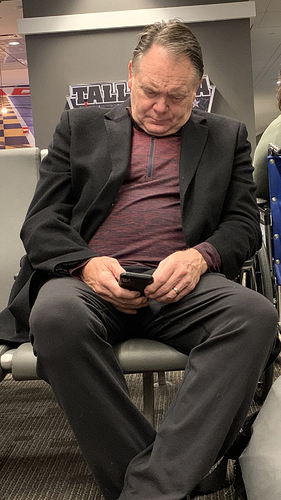