Has anyone heard how the ump from last night’s game is doing?

I hope he’s okay. About an hour after it happened the broadcasters mentioned calling the SEC office & found out he’d had a concussion & was being treated at the hospital. He had nausea, something that often accompanies a concussion. I’d like to hear more. If anyone gets an update, please post it.

Yeah that was hard to watch. Praying for him

I think he is OK, but I don’t think he will be on the field for today’s game. 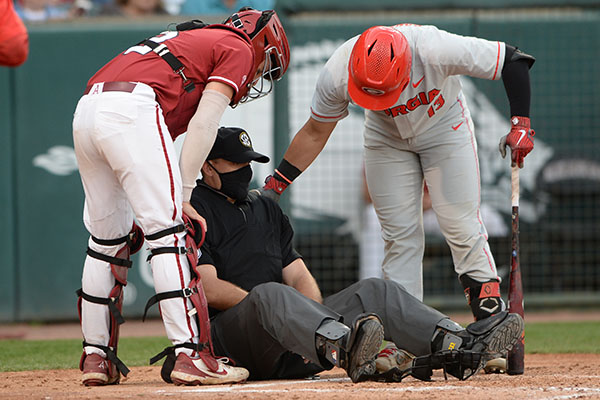 Matt I’m sure umps and refs have concussion protocols to.

I don’t like to see players or umpires hurt. But the replacement umpire behind the plate need to go get some glasses and fill out a job application for some other type of part time work. He was just plain horrible!

That happened to me about 30 years ago, except the catcher never caught the ball ,as I was looking over his shoulder. The ball
caught in my face mask, I was numb all over my body for at least 20 minutes. I told the other ump to get behind the plate and call the game. I would call in the infield. Of course I didn’t know about concussions.
Rawhide

That dude might not call a game this coming weekend either. As you say, concussion protocol kicks in.