Hogs will return to Arlington

Dave Van Horn said today that the Razorbacks have committed to play in the College Baseball Showdown in Arlington in 2023 and 2024. Opponents will include Texas, Oklahoma State, TCU, Michigan and Oregon State. 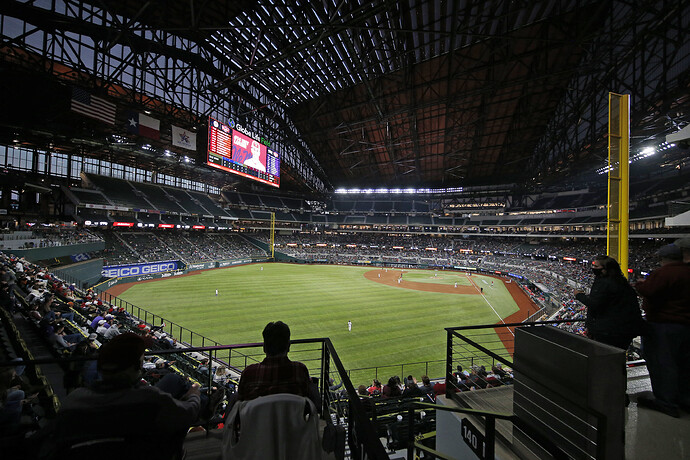 Diamond Hogs to play in Arlington again in future seasons

Wow That is some great Talent

That was a really nice three days of baseball last year.

I love this because it’s so hard to get tickets now at Baum. Arlington is a nice trip to make to a great venue where tickets won’t be an issue.

I wanted to go to Arlington last year but didn’t because of covid concerns (and the weather that week). But I went to see them in Houston in 2016, and it was such a fun trip. Playing in a major league ballpark with plenty of room against good competition. It’s a lot like a bowl trip.

I think it’s also impressive that the people in Arlington would like to have Arkansas come every year. They know they have a good thing when Arkansas is coming.

Matt, do you know if the Hogs are committed to going back to Houston anytime soon?

Matt, do you know if the Hogs are committed to going back to Houston anytime soon?

I’m not aware of any plans to go back there. I don’t think there will ever be a season in which the Razorbacks play in both the College Classic and College Baseball Showdown. I get the sense Van Horn liked the Arlington experience a lot and Houston might have some competition getting Arkansas to come back.

I hope they play in Arlington every year. I live in Fort Worth. Too hard to get tickets for Fayetteville. Made the trip up there 2 of the last 3 years.

What about returning to the Round Rock tournament? Noticed on Twitter that Jalen Catalon has an NIL deal to go down there and sign autographs during this year’s tournament.

I don’t know what the future holds for Arkansas and Round Rock. It might depend on how well this year’s trip goes. It is the first the Razorbacks have played there.

The Round Rock Classic is organized by the same people who are in charge of the Frisco Classic near Dallas. Arkansas was supposed to play in Frisco again in 2021, but the opportunity arose to play in the inaugural College Baseball Showdown last year in Arlington. Arkansas worked something out to get out of Frisco in exchange for playing in Round Rock.

From personal experience, the Frisco and, I assume, Round Rock events are good, but they are not at the level of the early-season events in Arlington and Houston. Those are the premier events for the sport, kind of like the Maui Invitational for basketball.

I have tickets to our games in Round Rock. One disadvantage it has over Arlington or Houston is that it’s games are outdoors in February. It’s certainly further south than Baum and will hopefully be warmer, but you never know with February weather. The tournament is being played at the same time Texas (and Arkansas) experienced the Big Freeze last year.

And all three of the Hog games are at night. Hoping for the best.

One thing to note: The Round Rock Classic is being played one week later than Arlington was played last year. I know the weather is still unpredictable that time of year, but it was in the 60s and 70s for daytime games in Round Rock last year, which were played the weekend after the big freeze.