Game 3 of 6. Sorry for starting this thread early, but frankly, the game is all I care about today. I told my dog on the way out the door this morning, that I don’t even care if I sell a car today, we’ve gotta give all our energy to the Hogs. So, he’s got his red bowtie on, and it’s 8 hours to gametime…Go Hogs!

Sell 2 today and the Hogs win

The one area I’ve been thinking about is we can’t go on one of those 5 - 6 minute scoring droughts. We’ve gotten away with it a few times this year and have won some games but Gonzaga could pop a 20 - 30 point lead on us and we could not claw back from that. If the drought included making 10 or 12 free throws, that might be enough to overcome it. We need to hit some 3’s also. We are still capable of making 8 or 10 even if Notae has gone cold lately.

Go ahead and sell a car if you can, Jeremy!

I’ll do my best, Clay. Hard to concentrate. A buddy just brought some deer chili by, so lunch is covered.

I’m trying to steel myself for a loss. I think we can win. I know I badly want us to, but I’m trying to get myself into the mindset that it’s been a good season already & that nobody expected us to get this far. That way if we get the win I’ll eat crow & enjoy the hell out of it. I admit I find myself dreaming of another NC. I’ve even been trying to negotiate with the Lord. “I’ll give up wins in the first game we play next year if we can just win the last game we play this year.” No need overlooking any paths to victory.

Can you email some of that chili? I was going to go out for lunch but a patient showed up an hour early…

Since we’re starting early……I’ll just get this out of the way for all who will undoubtably say it later, whether actually true or not:

These refs are awful and trying to protect the number 1 seed. And the announcers are cheering for Gonzaga

My “Allergies” are acted up today so I am going home early!

I have thought since the parings became official that Audiese would cover Holmgren, but after Clay mentioned Audiese on their point guard and Stanley on Holmgren I have loved that idea. Make it really hard for the offense to get into its flow and let let Umude put a body on Holmgren all night. The more I have thought about it the more I have liked our chances. Also the more I have thought about it I think we are a really bad match up for them on the offensive end. Who ever Holmgren guards should be going hard to the basket every time they get the ball. He can’t keep up with any player on our team. If they try to protect him by letting him guard the bucket…so be it cause we will spread them out and beat them in the mid range area of the floor.

That assignment just makes sense to me. I think we’ll switch it up some, maybe Devo on Nembhard for a while, but Toney on the PG makes sense. Cutting the head off the snake, as Nolan used to say.

I also like Devo on their point guard to change the pace.

How Arkansas defends the hi/lo action between Holgrem and Timme will be a big key. Gonzaga destroyed Memphis in the 2nd half running that hi/lo between those 2 bigs over and over again. Few is no dummy. He knows that he’s got a big size advantage out there on the court.

I have been pretty focused on work all day today until now. Hard to not think about this game tonight and it’s less than 4 hours away.

Was thinking we would win by the Historic and my favorite score of all time (76-72), but then thought we will do that against Duke on Saturday. I am thinking we need to keep them at less than 70 points to win this. We should be able to score 70 on them, and hopefully we keep them below 70. St Mary’s held them to 57 at home. Need our defense to show up and show out for sure.

Same mindset. I am as nervous as a boxer before a match. We face a dangerous foe, and we believe we can win but we also know it can go bad in a blur.

Well I’ll be on a dang freight train today from lr to Missouri, hopefully I’ll get to check in on the game some!! WPS!! 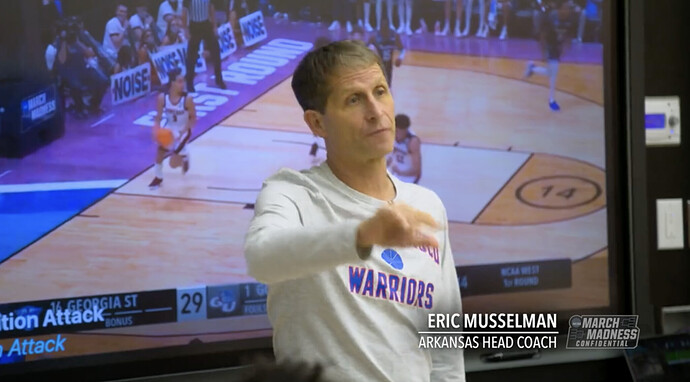 That sucks, Marc. Will the lab be on the coffee table?

My wife will have him posted up with a bowl of dads fav!! Lol

Gotta ask, what in the world are you gonna be doing on a freight train?