Hogs too thin to win?

Seth Davis went down the 16 remaining teams with their weaknesses, and that’s what he put for us. I would have gone with “the gang that can’t shoot straight,” but that’s just me. He thinks a 7 man rotation isn’t enough. 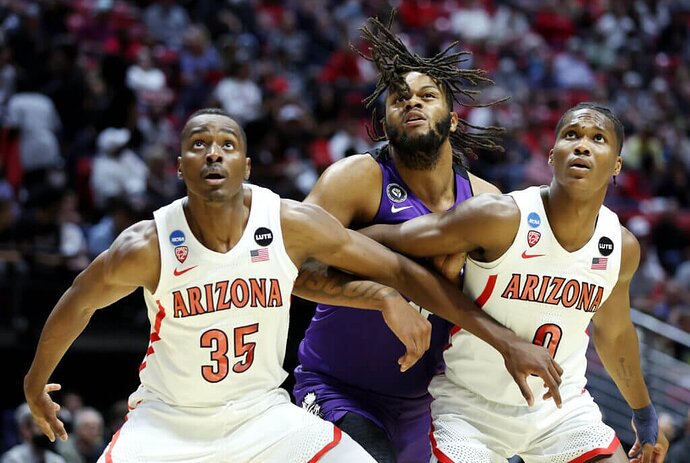 Is Jaime Jaquez Jr. healthy? Can Texas Tech get buckets? Will Chet Holmgren return to form? These questions will help decide the Sweet 16.

Well the argument against playing only seven players is by this time of year do they have fresh enough legs to play up to there best.
They screwed us by sending us to the West Region,up in New York last weekend, out in Cali this weekend, three different time zones. Lot to overcome, this will be like a home game for Gonzaga. But we will fight with everything we got hopefully it will be enough

I like our hogs having the chance to play the Zags! Bama beat them so I believe the hogs can too! The 7 man rotation is about what Muss used last season and it worked pretty good. Get some rest today and get ready for the opening tip Thursday!

I just have a feeling Kamani will have a role Thursday night because of their size. So maybe it’s an 8 man rotation this time.

I agree with you on Kamani, he will body up on any bigs.

I remember Ken Biley starting against Duke in the '94 championship just to hound Grant Hill. That worked. I could see a few benefits in KJ playing more (early).

Besides our awful shooting, I think our more worrisome, but maybe still correctable, weakness is ball handling. Seems like we flat give the ball away at least 3-4 times a game.

The starters all played 30 or over minutes. Nembhard played all 40 minutes.

I found this interesting, on the Hog Pod with Bo Mattingly earlier this week. Nolan was interviewed and he said that the reason Biley played was because in a previous season, on senior day he had missed putting in a player that hadn’t played all season and he felt so terrible about it that he made sure it never happened again. Biley went in and gave it everything he had and held Grant to zero points in the 3 minutes he was in. . . Biley to this day talks about starting in the National Championship game.

It was an awesome interview.

Gonzaga only played 8 player against Memphis.

I noticed the same thing.

Yeah, I am sure that Nolan put Biley in for those three minutes to make sure he got him in the game. I don’t think it had anything to do with playing him against Grant Hill. It worked out though, like many things Nolan did that didn’t work for others.

Would not be the first time my memory replaced simple facts with myth.

I like the way your thinking, it would not surprise me to see him play several minutes in this game. Look for him to spell JWill and Wade if this game is close to give them a blow or if there’s foul trouble, he’s a scrapper. WPS

I enjoyed the interview too but I wonder if Nolan is getting a bit jealous of Muss stealing his thunder. A LOT of his comments seem to criticize the way Muss coaches without naming him specifically. Like reviewing game film and making changes game by game based on opponents.

The majority of the teams are only running 8 but 3 of the starters are grabbing significant minutes. Ironically Gonzaga of the 16 teams runs their team a lot like us. Their 8th man if they play him is grabbing less than 10 minutes. People see why they want.

I don’t think Nolan is jealous of anyone stealing the thunder! Nolan is a Razorback fan who happens to be a retired former Razorback National Championship Coach! In an interview he was very supportive and had praise for what Muss has done and where he is headed.

Coach Richardson isn’t jealous of anyone, nor should he be. He will ALWAYS be an Arkansas Basketball treasure. The technology and preparation are different now. I guarantee Muss wouldn’t hire me for the same job I had under Coach Richardson…I simply don’t have the tech saavy. Coach Richardson still comes to the games, when he can, and praises the toughness of Muss’ teams every chance he gets. There are different ways to skin a cat…nothing more, nothing less.

There was a time when bears knew to keep away from Nolan Richardson. Man could he stare down a ref. Coach Richardson is an Arkansas treasure.

The player who didn’t get in… Might have been Eric Poerschke? I think they had some award named for him that they gave it for a while.

Seems Nolan half way compared him to Larry Bird once.

As with many interviews, intentions are not always correct. Nolan was also interviewed by Mike Irwin and had the highest praise for what Muss has done and doing.

I would definitely use Kimani to help out on Timme and on the boards. But I haven’t gotten a phone call from Muss so we will see.