Hogs should be taking off

very soon for Nashville. They’re loaded up. Shoot around at the arena tonight.

Vanderbilt’s test results came back with enough negative results for the game to be played. 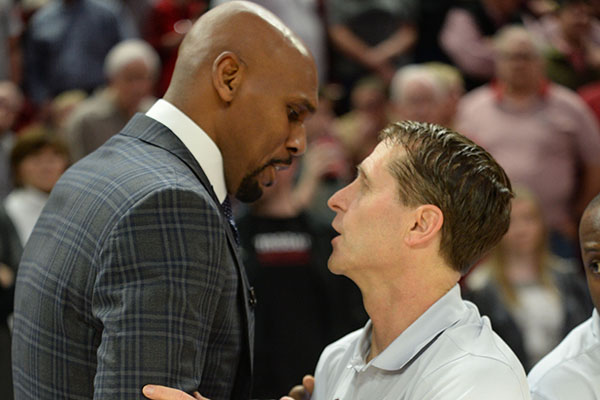 Arkansas-Vanderbilt game to be played as scheduled

Vanderbilt’s basketball game against Arkansas is still on to be played as scheduled on Saturday.

I SOOO want to drive down to the game and was orig. planning to but this covid funk is telling me my best bet is to watch it on the front row in my living room GHG!!!

I SOOO want to drive down to the game and was orig. planning to but this covid funk is telling me my best bet is to watch it on the front row in my living room GHG!!!

Not sure if you could find a ticket anyway. StubHub and Ticketmaster have nothing available for any Vandy home game for the rest of the year. And listed attendance at their last home game was 101.

It seems like I read some time ago that they were not going to allow fans at their basketball games.

Thanks for the concern but grabbing a scalper tix is a possibility. AND my wifes daughter is a lab scientist @ Vandy so i could’ve went through her to get one. > getting lazy and forgetful <

I recall that also

I had nothing against Stackhouse when he played the game but I don’t like last years marvin hagler stare down pic over coach muss. GHG!!!

Wish they had moved the game from Covid Memorial Gymnasium to BWA.

StubHub and Ticketmaster ARE scalper tix. With most schools going to virtual tickets on an app, you’re not going to see much of the guys standing outside the arena holding up a handful of tickets. And again with 101 people in the building (which probably counts both teams and media), how many tickets are there to scalp?

family and on campus proven negative testing only possible, gotta go through AD ticket office. VERY LIMIted is not shut down by mayor which obliterates even having one. Lockdown is level 2 almost level 3 according to my friend Alex Jahanigar who is the Covid task force chairman for Nashville. Trend is better but that is all relative. Campus is not open.

Nashville was open for NYE. Guess that helps make the mayor more money than bball.

no we were not, big party was television only WAY, WAY down with bars at 1/3 guidance capacity. Mayor is a curmudgeon who don’t give a damn about public pressure or opinion. I know the numbers that come in to guide the task force on recommendations and rules. Like all tourist meccas, Nashville is way off expectations. Do you not remember how much of 2nd Ave was shut down due to bomb investigation lock down??? Bridgestone is letting less than 1000 per Preds game. All bars local to that see almost zero after game attendance. We were not open for NYE except at a miniscule and controlled number.

Isn’t the SEC Tournament going to be held in Nashville in March? Wondering how it will be affected.

Isn’t the SEC Tournament going to be held in Nashville in March? Wondering how it will be affected

Yes it is, and it’s a pretty good guess that there won’t be a lot of people present. Maybe it’s not too late to shift it to another city, but nobody can let a lot of fans right now in except maybe if they played it at JerryWorld. And JerryWorld isn’t available; they’re booked for Supercross that weekend.