From SEC Media Days in Birmingham: 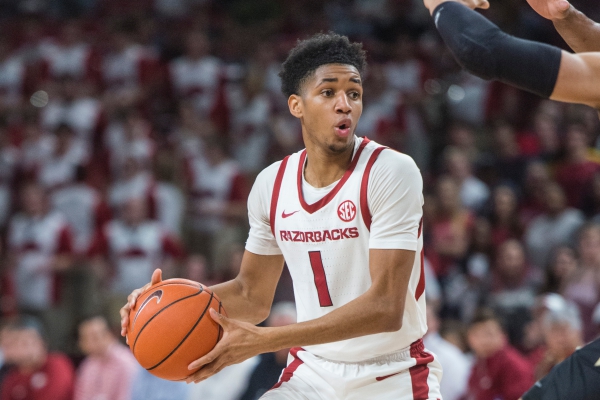 Arkansas was picked to finish 11th in the SEC this season in a media poll released Tuesday at SEC Media Days in Birmingham, Ala.

I’ll take that bet! Better even if the big guy gets the waiver…season opener in 3 weeks, they have to decide by then, right?

You would think, but I wouldn’t be willing to bet on it

I’m really looking forward to watching this season. I think we’ll be top half of the conference. Doubt that will = NCAA, but I bet we’ll be “on the bubble”. I’d be happy with NIT and win a few in the NIT. Actually I’d be happy with winning AT ALL after this football season, lol

i am excited about coach muss. when i hear players say in interviews, well, we really had no plays, end of game especially, it will be refreshing to see have a different style coach will do here. we have no height period unless vanover gets a waiver, and he is not the prototypical big man.

just excited we are not going to see the same old same o this year.

Arkansas always finished higher than where it was picked under Anderson. I expect that to continue this year. Should finish in the top half as one poster predicted.

There seems to be a general opinion that coaching has been upgraded significantly and we lost some games last year in closing minutes because of poor coaching. That coupled with the fact that the players improve the most between freshman and sophomore seasons and addition of an experienced PG in Whitt, we should expect a NCAA tourney team.

Moving on to basketball when they tip off has become the norm.
I just hope this years Hogs can beat Auburn and LSU. I hate Pearl and Wade with a passion.
I think our hogs will get the 5 seed in the SEC tournament. They will have the fire power to score!
There’s no reason to believe the NCAA will act in a positive manner for Vannover’s waiver to play! Plan on him sitting out.

PJ, that’s a different outlook than you’ve had in the past. In previous seasons, you have pointed at reasons we couldn’t or shouldn’t win - too young, too small, etc.

I’m really surprised we are behind South Carolina here. Anyone seen that roster? Lol. Makes no sense.

UGA is also picked to high. Edwards yes, but Claxton going pro is a massive blow. Only thing they had last year besides Hammonds and Harris playing well at random times.

PJ, that’s a different outlook than you’ve had in the past. In previous seasons, you have pointed at reasons we couldn’t or shouldn’t win - too young, too small, etc.

I did say that last year because we had 9 new players on the team with just 3 returnees. We were the second youngest in the nation. I didn’t say anything like that in recent seasons prior to that except the year where we lost Portis and Qualls and Williams.

So, last year we were on the NCAA bubble till late, made NIT, won one game,

This year we lost Gafford and replaced him with Cylla. That is a negative.

We had inconsistent PG play last year and having Whitt is a plus.

Joe, Chaney, Sills, Jones were key contributors last year. They have been able to go through their first offseason development now and a year of experience, That is a plus.

General opinion is that coaching has been significantly upgraded. It should play a role in close games. Last year, we were 6-6 in close games. That should at least go 8-4 with improved coaching and play calling in closing minutes. That is a plus.

So pluses outweigh the Gafford minus. Does that not lead one to conclude that we should get off the bubble and into the tournament?

I don’t think we will make it to second weekend of the tournament, unless Vanover becomes eligible.

General belief is that coaching has been significantly upgraded

“General belief is that coaching has been significantly upgraded”

I agree that a coaching upgrade is the “general belief”. I’m not so sure of that yet, and I don’t think you are yet either PJ.

One area that I’m sure Muss is better than Mike, is communication with the media and fans. Mike is old school in that he is not really worried about explaining things to media and fans. He was his own worst enemy sometimes after losses, relying on standard coach speak responses that left fans angry. I suspect Muss will have the stats in front of him after a loss and explain in detail why we lost. The videos of his practices are presented to communicate to fans the things he wants communicated. Again, Mike wasn’t concerned about whether the fans understood what he wanted. (Maybe that’s too harsh. Maybe more accurate to say that communicating with media and fans was not a strength of Mike’s.) But he sure wanted his players to know. I’m not convinced this year’s team is going to be in better condition than last year’s team. Conditioning was a heavy emphasis for Mike too. Muss clearly believes in details and precision of movement. Mike was more focused on aggressiveness and attitude of his players. More concerned about forcing the other team to prepare for us, rather than precision preparation for the other team.

Mike has proven his methods work. They didn’t work well enough here to keep his job, but I suspect that may have been more about his slow adaptation to today’s recruiting environment, where players transfer so often, than “on the floor coaching” in practice and games.

Having said all that, I’m excited about watching the Hogs play under Muss. He has done so many things well that fans can’t help but be encouraged. Of course, he hasn’t lost a game yet.

I certainly feel like we will make the tournament. Gifford really is a big loss. I do feel we will rebound better than last year’s team. The emphasis on blocking out and spacing should let us rebound at the same or better rate as last year.

I will be glad when BB season finally gets here

Me too. This ain’t Ark football. This team is minus Gafford and plus a lot. Should be fun to watch as they play and grow.

Finally Arkansas has a real coach. They actually do drills now. The players are realizing that all Anderson did was put them out there and say take good shots and get stops. But he never showed them or trained them on how to do it. It may take a year or two, but my guess is we will see immediate progress.

Anderson is gone. No point in making up lies.