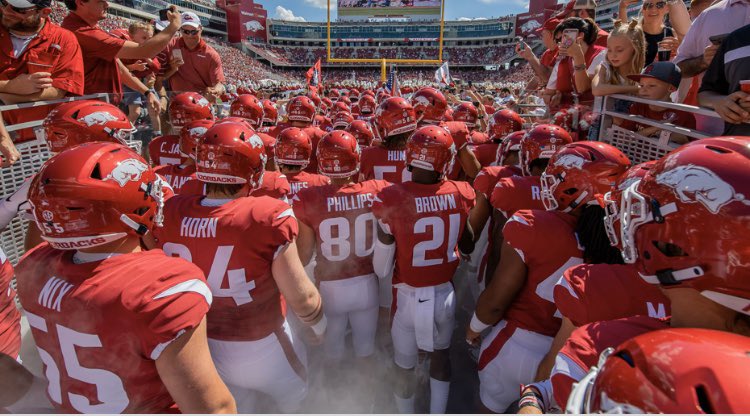 2020 lineman from Independence C.C. in Kansas.

Offers include Kentucky and Texas Tech.

Jeremy on a possible OV to Arkansas:

“Just got the offer. I’m going to give a couple days to think about it . Bet I’m interested in Arkansas.”

JC O- Linemen are a crap shoot at best. Most never work out. Going the JC route for quick fixes seldom work. And is a sign of desperation.

They went one out of two last class. Cunningham has been a key contributor and should make a good jump as a senior.

What’s the percentage of high school kids that have panned out?

JC O- Linemen are a crap shoot at best. Most never work out. Going the JC route for quick fixes seldom work. And is a sign of desperation.

You may be right.

And going the portal route hasn’t seemed to be a huge success for us, either.

And yet, if CCM and staff DIDN’T look at both as a means of supplementing HS recruiting, they’d be criticized for NOT exploring all options.

You mean the High Schoolers that you praise to the hilt year after year? Your the broken record. Every year the same thing. This class is the beginning of the turn around in the fortunes of the football program. Just like Clay. Every year the Offensive line looks so much better than the previous year.

There are some here that no matter what CCM does at this point it’s wrong… winning will help that with some but not all. Their “coach” either got fired or didn’t get hired and just can’t let it go.

I’m pretty conservative when he comes to pumping up kids. Anytime kids have five to twenty offers they’re pretty good in HS. How all it translates in college who knows?

Year two of a rebuild and the lines are always the last to get there. There is good young talent on the team. They’re going to be a year or two away. Not what people want to hear, but there’s where you’re at right now.

I can see Cunningham, Stromberg, Limmer, Rathcke, Gatlin, Latham, Winkel, Robinson making a pretty solid line next year. If not, you can point this out to me.

I said the line would be up and down this year and struggle against top tier SEC defensives. I think they have improved from last year. Pretty impressive considering all of the injuries for a line that couldn’t afford injuries.

Big kid and he seems to like to maul folks. Aggressive attitude.
He would probably help our 0-line play.

I’m not much of an optimist these days but you have to remember that they lost (maybe the best) starting OL Gatlin on day one of fall camp. Jackson just retired. Capps may be close behind. You have a TRUE FROSH flip-flopping spots in fall camp because they realize they’ll need him. JUCO transfer Cunningham flip-flopping spots in fall camp and into the season trying to get him on the field.

Continuity game-to-game has been non-existent. Continuity from practice to games = non-existent. An awful lot of potential bowl teams would struggle to be bowl-eligible with that reality.

There have been a lot of head-scratchers undre Morris but injuries are not something I can hold against him. Bielema, we should remember, had some bad luck with injuries as well.

One of these days, injuries, scheduling, etc., will align again for the Hogs.

I would say that our coaching staff might want to also take a look a the QB from the way he looks on the mid-season highlights. The O-Lineman looks to have the size, physicality and footwork that we desperately need.
While watching the highlights I couldn’t help but notice the athletic ability the QB showed along with making all types of different throws. We need so much help at so many areas it would be interesting to know more about this QB.

I will not complain about where he finds players! We’ve had good one come from HS and the JUCO route!
I do expect the OL to improve next season.
Strombergh true freshmen from HS starting and like other folks have mentioned Cunningham from JUCO getting reps and staring so there’s a few impacting now!

So what is Richard supposed to say? Until they get on the field and strap them on at the D1 level you will never know.