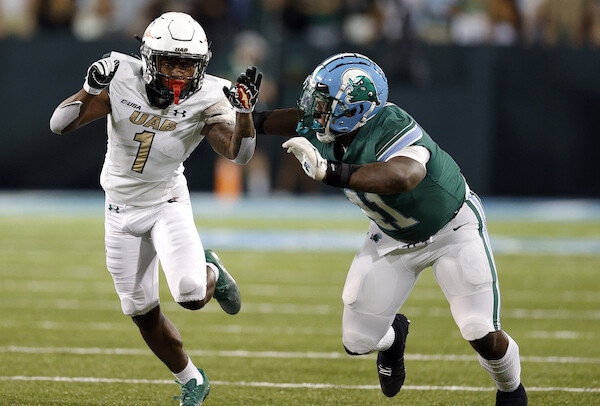 Arkansas is expected to host defensive lineman Darius Hodges for an official visit this weekend.

He plans to make an official visit this weekend.

Tulane bio says we offered him out of high school. That would be the former regime.

Heard some rumblings this could happen.

All I can offer is that he must be a player! In Sam we trust

He’s not that big for DL, must be explosive

Outside LB/rush end - we are definitely shoring up the edges of the Defense with Sanders, Landon Jackson and this guy

I’m not sure how accurate these weights are on these guys.it says 280 but he may be 290 or so now but I get it,you would like them to be 300+ but remember the most dominant player in the NFL is Aaron Donald who is about 285-290 but is so strong and explosive he is almost impossible to block 1 on 1

Jordan Domineck told me he weighed 245 while the Tech site said 235. He visited Arkansas and weighs 253.

exactly! I never really pay a whole lot of attention to the weights bc I don’t know when it was recorded but this kid can play I just put up his highlights

No visit this weekend. He’s going to have to reschedule.

Due to the weather ?

I’m sure it didn’t help.

Wonder if the news of Texas interest had anything to do with it?