Hogs more selective from 3 of late

Through the first 13 games, Arkansas was attempting north of 27 3s per game. That number sits at 16.6 over the last 5 games. I asked Eric Musselman why that’s the case on Monday: 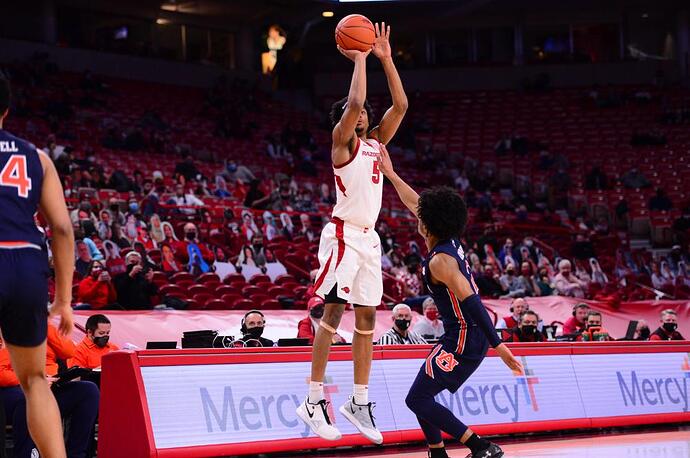 Hogs much more selective from 3 of late

Since the Jan. 13 blowout loss at LSU, Arkansas has flashed a bit of an identity change in terms of perimeter shooting.

The college and pro game is so screwed up… Nobody is shooting a mid range jumper anymore. You have most players who are not good shooters just firing away at the rim without any regard for their ability to shoot well. Good shooters are rare and really rare from long distances, yet every body who has a jock strap fires the ball up without regard for their ability to make a shot behind the 3 point line.

Their is no reward for getting a good shot anymore. It is all about the fact that sorry 3 point shooters are more valuable than good players who can hit the mid-range shot.

You don’t hear the words “Post Feeder” anymore either. No one is trying to feed the Post Player. Most teams rarely have someone who posts up.

What would they have done with Jabbar, Walton, Chamberlain, etc?

Trust me, if we had a Lew Alcinder or Wilt Chamberlain on this team, Coach would routinely call plays to get the ball to them at the block.

Unfortunately the rest of the way we really need to improve our 3 point shooting attempts and success. JMHO we need to be a deadly 3 point shooting team and high attempt team to be successful down the stretch. While continuing to work on dunking at the rim.

The reward for consistently getting good shots, in most instances, is team success.

I agree, we need more good shots, and more successful ones.

Other teams have benefit of scouting reports after number games played. If we were lighting it up from the three point line, I suspect the other teams would focus on stopping that. It ultimately boils down to decision making and that is getting ball to player who is open to make his shot consistently.

Okie State did a great job of getting ball to their key player in last five minutes last Saturday and he produced. I thought we would have locked him down with one of our better defenders but maybe we tried and couldn’t do it . Adjustments have alot more to do with wins and loses at college level than pros–good teams have good players and make better adjustments; older teams trend in that direction too. Our lineups likely reflect more time required to mess together all while doing it on the run in this Covid world.

Is a 15-footer a good shot if you hit it 40-45% of the time? Basically, no. Rick Pitino and Pete Carril figured that out before anyone else. Carril wanted nothing but uncontested layups off a backdoor cut, and threes. Slick Rick got Providence to the Final Four with one decent player – Billy Donovan – and a whole lot of threes.

If you shoot 45% inside the arc and I shoot 33% outside the arc, I win. That’s what it boils down to. I’d feel better about turning down threes if we were making more layups. Our percentage on layups isn’t much better than our percentage from deep.

Jimmy Whitt could drive and get those 8-12 for jumpers very well.