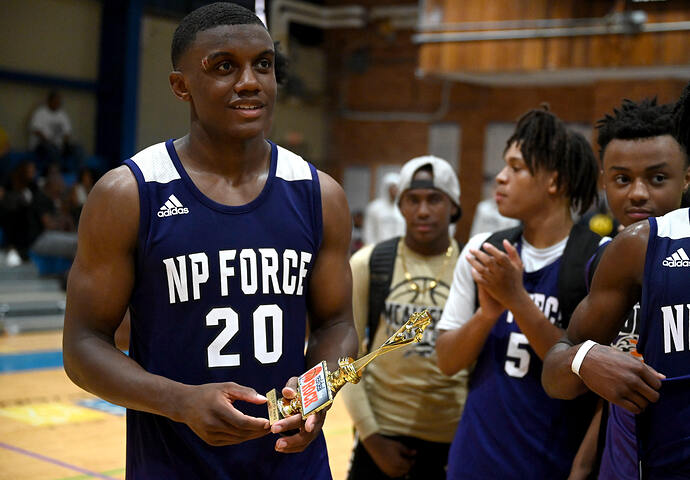 The addition of Magnolia 4-star guard Derrian Ford to the Razorbacks’ basketball commitment list on Wednesday is another positive step.

Dudley, can we keep Ware?

I certainly think Arkansas is in better shape than it was pre-June, but I am not ready to make a call yet.

He is very quiet, unemotional, even keeled and hard to read.

What is Ware’s relationship with Ford like? I ask because they visited together.

Friends, but not best buds

In my opinion Ford was and now is the most important recruit we’ve had in a long time. His talent is amazing and from a program importance going forward immeasurable.

My thoughts are Moody was at his time not only talent wise but also perception wise. Several folks didn’t think we would get either kid. Muss may not get all the top Arkansas kids but it won’t be from lack of effort. I also wouldn’t be surprised if he did get most of them.

Hopefully Ware will be the next.

Derrian Ford is one of most respectful, polite and quality kids that I have ever had the opportunity to cover and be around.

I do think you are underselling Ford

Best to get as many as you can

Adam, I agree with you about Warren for 2023. I should have worded my post better. I was referring to 2022 recruits.

I would never say anything negative about a kid who chose my team. Some people love doing it. I don’t understand it and never will. I agree with Dudley on this. D.Ford and family are very good people.

Please let us know when Muss asks you what you think.

You gave your opinion on the kid and cast aspirations on him.

I then gave my opinion of him based on dealing with and being around him for the last two to three years.

He appears to me to be a young man with great character.

I won’t make as assessment on the AAU situations when I have info and not make a judgement until then.

Not sure why it seems to upset you when somebody doesn’t agree with your take or offers up a differing assessment.

You may be right. He might not succeed in college.

But I value the opinions of Muss, Scott Drew, Mike White, Kellen Sampson than I do mine, other media and most fans

Not sure why it seems like it upsets me when someone disagrees with me.

I didn’t call any names. I didn’t mock you. I didn’t say your opinion was crazy. I just explained my opinion. So, maybe that’s a you thing thinking I’m upset.

I’m not upset. Jeremy is in the thread with the mad comment. Not me. You know, Jeremy, the guy who called DVH and the Hogs’ baseball team chokers. Then, he came with a “let me know when Muss asks you what you think”. That’s ironic.

So, maybe he’s the upset one and that’s the one response in the thread that I take issue with because it’s coming from someone who called DVH and the Hogs chokers. He called the best team we have had chokers.

I have an opinion on a recruit and somehow that means I should let people know when Muss cares. But I’m the mad one? Alright, Dudley. Sure. I was on another thread 30 seconds later telling Matt how cute his new daughter is. Whatever, man.

As for the “aspirations” I cast on this thread, I took them down, because while I believe they are true, they were fairly harsh and this is an opinion free zone if you don’t have the pom poms out, and I also took them down because he’s a commit.

I PMed jerryj and I meant what I told him. I took the posts down because they were pointed and he’s a Hog commit (and I like Jerry).

But, I’m not mad. Never was mad. Never acted mad. Just explained my reasoning in response to your post—you know, all the things people do on message boards.

I also said there must be something that Muss likes (physicality as a guard) And, I’ve always said Muss is great. So, there’s no need for the implication that I don’t value his opinion. He has forgotten more basketball than I’ll never know.

I said plenty, but none of that “won’t succeed/don’t value Muss’ opinion” stuff.

But, I will shut up because no one seems interested in a discussion of Ford, Warren, etc., and as others have correctly pointed out, my opinion doesn’t count for much.

I think plenty of people, including myself, are interested in discussing the recruits.

I disagreed with your thoughts on Ford.

Nothing more, nothing less.

Absolute money from 15 ft and in

Needs to become more consistent knocking down the 3-pt shot; that’s all that’s lacking in his offensive game

Terrific defender and rebounder too

That’s the winning strategy for Arkansas

Not sure why you called ME out by name, when nearly everyone here objected to your opinion of Derrian Ford. A lot of us are thrilled to have him, and thought it would be a struggle to get him. You basically called into question his character, by referencing his changing of AAU teams. Not cool. As far as the baseball Hogs, I said something stupid out of disappointment, immediately regreted it, and apologized as soon as I could. Most people here accepted my apology, but you seem to hate it if you are not the smartest person in the room. Just my opinion. I pay my money to be here every month, just like you do. Oh, and btw, you didn’t have to put Dudley saying aspirations in quotation marks. That is very passive aggressive, when it was very obvious he meant to say aspersions.

I called you by name because you were the one with the weak “let me know when Muss asks you” take because of my opinion on Ford when you cried like a baby and called into question the manhood of an entire, great baseball team and coaching staff.

And, like most here, I accepted your apology until you hypocritically made a run at me for saying something nowhere near as bad as what you did.

As for thinking I have to be the smartest guy in the room, that’s just false. In my last paragraph I said Muss has forgotten more basketball than I’ve ever known and that my opinion doesn’t count for much.

But, since we are speculating about what people think of themselves based on posts, to me it seems that you think we should take your opinion as Gospel because you washed towels for Nolan.

I hope that’s not too passive aggressive for you. My aspiration is that it isn’t.