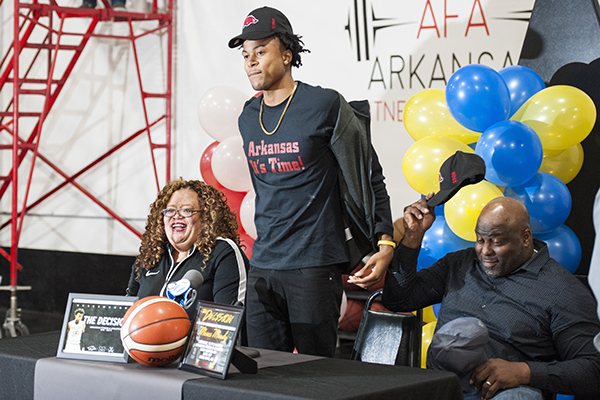 The University of Arkansas basketball recruiting class is ranked No. 6 nationally by ESPN after receiving the commitment of forward Jaylin Williams on Saturday.

After CEM gets this undersized team to finish this season in the top 5 in the SEC, win a couple of games in the NCAA Tournament I will predict that we can look forward to him starting to sign 1-2 five star recruits starting in 2021/22. Once that happens, Arkansas will be going back to final fours and the glory days of the late 70’s and early 90’s will be the new normal.

I believe much of our 2020 class ranking improving much more will depend on KK Robinson and Kyrie Walker. If somehow Walker comes in with the 2020 class and KK signs as well then yes we will end up in the Top five.
However, If Kyrie decides to go to college at all he could also possibly join the Hogs after the Christmas break and play this season which I hope he does because he could help put this current team over the top and help get them to the sweet sixteen IMO.

And now we hope Moody, Williams and KK stay committed for the next five months. Time for some stomach ulcer pills.

I dug a little further on Warren Nolan’s projected record of 28-3. That also projects to the #4 RPI which would be a 1 seed. I ain’t drinking that much Kool-Aid, y’all.

I would be thrilled with something like a 6 seed which would avoid the dreaded second round meeting with North Carolina. Heck, at this point I’d take the play-in game in Dayton and be happy. The play-in, which is usually 11 seeds, would also avoid UNC in the second round by the way.

Looking at last year’s bracket in comparison with the NET rankings, the 6 seeds had NET numbers ranging from 18 (Buffalo) to 28 (Villanova). You would expect 6 seeds to be 21-24 so it wasn’t a hard and fast link but pretty close.