Which was 8th out of 10 games on the ABC/ESPN platforms last weekend. 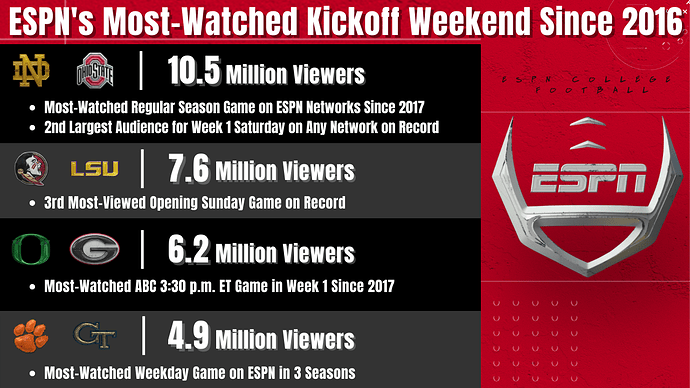 ESPN networks registered its best kickoff weekend since 2016 and second best since 2009. Across ABC, ESPN, ESPN2 and ESPNU, 17 games..

8th out of 10? That’s surprising, especially considering the Georgia Oregon game at the same time was a total blow out.

Well the other 7 games with more viewers were really big market teams or in a time slot with no other football games for competition. Can Pittman become a national media darling once again this year and make the hogs a prime time commodity or will we just have to make it to the sec championship game to become a national brand? I guess it doesn’t really matter what the tv ratings are but would be nice to get more night games

Keep in mind the game was on ESPN. Cable numbers are always going to be smaller than over-the-air numbers on CBS, ABC, NBC and FOX.

The Arkansas-Cincinnati numbers were nearly the same as Florida-Utah on ESPN later that day.

Yes, correct, and we were in competition with UGA/Oregon, which was on free tv at that time. If those games had been flip flopped the viewers may have been as well.