Hogs back in the good side of Lunardi's bubble

After Lunardi’s bracketology had taken us out of the field of 68, he has now moved us back in, barely. The Hogs are a play-in 12 seed facing BYU. It’s tough moving upward with our OOC schedule, despite 3 straight double digit victories. We’ve just got to keep on keeping on and win all our OOC games. 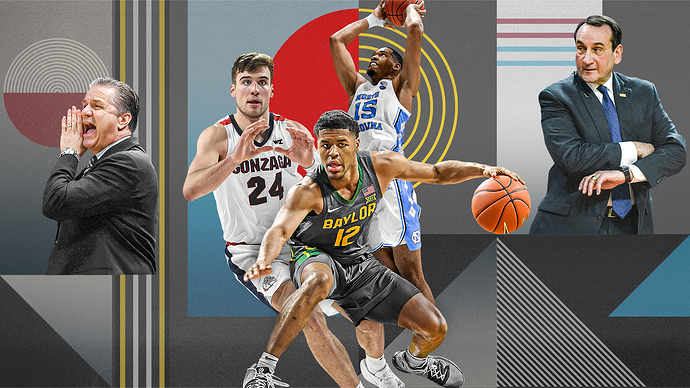 Duke moves up to the top line, and Virginia and Kentucky slide in ESPN's updated three-version projection of the 2021 NCAA tournament.

way too early to ask, but I’m bored on a friday afternoon

We don’t play OSU until we are half done with our SEC schedule. We should have a pretty good idea where our seeding will be before we play them. We probably will need that OSU win just to maintain what our seed is projected before we play them. To get a 5-7 seed, we will probably have to end the season in the top 4 of the SEC. Probably need a top 5-6 finish to get an 8-10 seed. Personally, I’m hoping for a top 2-3 SEC finish and a 3-4 seed.

Obviously, most of the above is all guess work.

I just took a look at Warren Nolan’s site to see what they’re projecting using our RPI (which is decent right now, #36). He projects us out to #14 on Selection Sunday which would be outstanding. But he only has us playing 18 games, including 9 SEC games, so that projection is pretty much garbage now (the nine SEC games they project are an 8-1 record, losing only to LSU at Red Stick, I’d take that for half an SEC season; overall record of 17-1, so they expect an NC sweep).

The other SEC games he has, obviously all wins: @ Bama, Misery and Ole Miss at home, @ Tennessee, Georgia, a sweep of Auburn, and Vandy. Why they missed the other nine games, including both games with TAM, I have no idea, but I’m gonna ask. I do see that the last game he has for us is Okie Lite, so February and March are wiped out.