I really like the uniforms today. LSU is wearing solid purple and the Razorbacks are wearing broad striped red and white. It makes it easy to tell the teams apart.

It seems strange to be within a few blocks of the game and watching on TV. 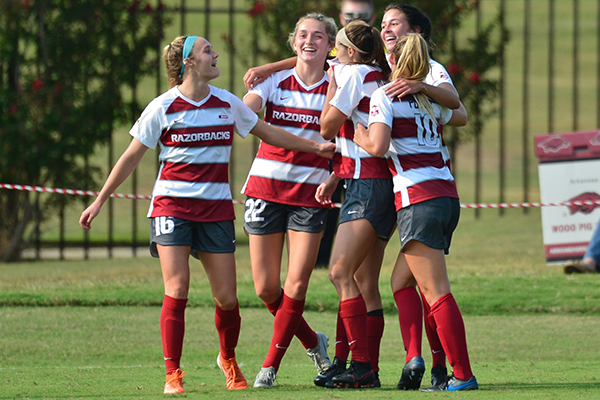 Arkansas’ soccer team continued its dominance of the SEC West on Saturday at Razorback Field.

I had a hard time making out the numbers on the back of the Jersey. White with a narrow black outline. Thought the unis were neat otherwise.

Thank-you very much for taking the time and effort today to keep us all informed!

You have a point tnhog66. I wasn’t looking at the numbers, rather depending on the announcers. (I don’t know the team well enough for numbers to mean much to me.)

I was there. It felt good to be back at a college game again. Here is my recap:

Arkansas’ soccer team continued its dominance of the SEC West on Saturday at Razorback Field.

A name to watch: Ava Tankersley, a 5-11 Freshman out of Missouri.

She covers a lot of pitch in a hurry, and her cross to set up Parker Goins in the 2nd was a thing of beauty.

Announcers could not pick out numbers. They just talked about anything other than the players because they were not sure who was who. Me neither.

The announcers were not at the stadium. They were calling the game from somewhere remote; probably their houses.

They were calling the game from somewhere remote

One was in Tennessee; the other was in Connecticut.

I guess that’s what we are stuck with. I was underwhelmed.

Piggus I don’t think Ava was all that hard to find. She played for Saint Louis Scott Gallagher’s ECNL team. If you are playing ECNL you will be exposed to college scouts almost every time you take the pitch. Good to see Coach Hale pluck another one out of St. Louis. UofA soccer is well positoned to recruit Stl. KC, Dallas and Tulsa. Those are some serious soccer hubs!

Tankersley had a couple of pretty good looks yesterday. She nearly had a goal just before her assist, but her header on a corner kick went off the past. She also had a good look from just outside the box in the first half.

Not a soccer fan, but I am a Razorback fan. I’d support a UA tiddly winks team if it had one. So…I am thrilled the ladies beat LSU. Hope they win the SEC. Proud of ‘em.