Last year I posted a message about a concern I have with the Hog’s entrance at RRS before the players and coaches run through the “A.”

My concern is about the potential exposure of the players and coaches to an oxygen-deficient atmosphere due to the nitrogen fog they stand in for several minutes. I’m curious if any forum members with medical or safety experience concur. 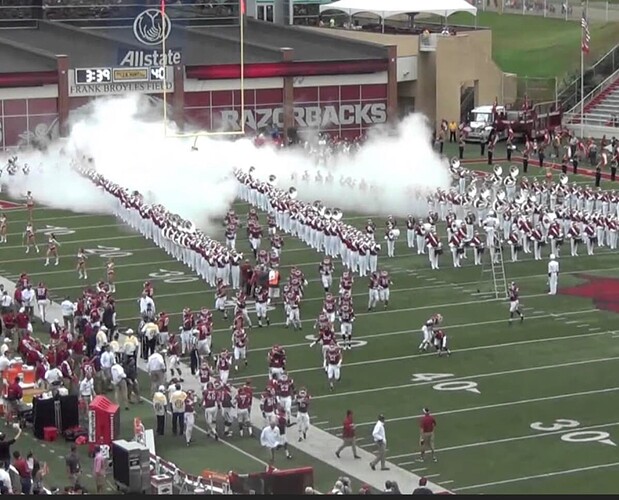 The air we breath is about 20.9% oxygen and 78% nitrogen. According to OSHA, the adverse physiological effects of oxygen-deficiency can occur when the oxygen concentration falls below 19.5%. At a level of 19.0% oxygen, effects in some people can include impaired cognitive function, increased heart rate and respiration, and decreased coordination. These effects can go unnoticed by the exposed individual.

When a large amount of nitrogen is released into the air by a ground-level fog machine at RRS, the concentration of oxygen nearby decreases. A decrease of 1-2% can be significant. Is the drama benefit of the fog worth the potential risk to the team’s performance?

Some teams and fog machine vendors avoid ground releases by directing the nitrogen (or carbon dioxide) gas upward. Makes sense to me. 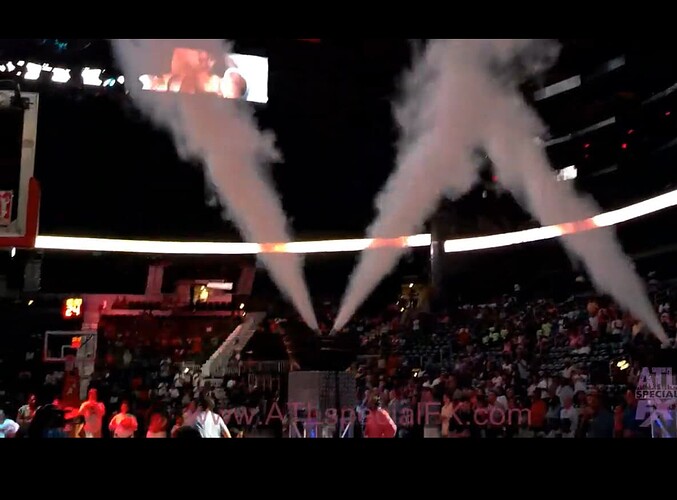 Perhaps HK and CSP have already addressed this issue and have mitigated any possible adverse effects. I hope so. We need fast starts.

[I have decades of experience with industrial safety OSHA compliance. I’ve known people who died from moderate oxygen deficiency. I almost died myself rescuing an unconscious colleague who passed out from a brief low oxygen exposure. So, I may be a little overly concerned.]

That’s a legitimate concern and hopefully it has been addressed.

I did some Googling and it seems the fog machines use CO2. Which ain’t great for you at high/prolonged exposure either. But they also don’t keep the fog machine on for very long AFAIK. Turn it on when the band starts playing, basically.

From what I have observed, those machines are typically turned on after the players walk out the doors and come onto the field on the north end. I don’t think anyone is standing in the fog for very long.

I think this is the likely composition of the fog. Dry ice is the frozen state of CO2. When placed in water it changes it’s physical state to the gaseous form of CO2 which is extremely cold. As the CO2 vapor is blown out by the fan, water in the atmosphere condenses around it forming the dense vapor that we see. It’s probably analogous to expiring a breath on a cold winters day. The only physiological effect I suspect, is that the players probably find it exhilarating and refreshing.

It could be easily and cheaply checked by one of those 02 saturation measurement devices on a couple of players just to monitor the situation.

For the Texas game last year, my tickets were in the NEZ. I walked over to the tunnel to see how the fog was made. Saw two large cryogenic dewars flanking the path outside the tunnel. The operators confirmed to me they were using LN2, not CO2. The diggers opened the dewar valves briefly when CSP and the first players appeared. (Few fans could probably see that DMac lead the team out of the tunnel.)

The coaches and players gathered in the fog for about 20-30 seconds before they were given the signal to run through the “A” and then the big fog started. Visibility was very limited. I could barely see CSP when he was 10-15 ft away.

The fog is harmless, condensed water vapor resulting from the rapid expansion of the -300F liquid nitrogen. Where there is fog, there is excessive nitrogen and lower oxygen. This is problematic both outside and inside the tunnel.

I’m not suggesting the issue is life threatening. But, players and coaches could experience mild oxygen deficiency symptoms and nobody would be aware of it. If CSP wants fast starts, maybe the players need a little extra O2 before the game and skip the fog.

Matt, one does not have to breath oxygen-deficient air for very long for there to be a problem. One just might not be aware there is a problem. Suppose that is my point.

In the spirit of “see something, say something”, I’ll probably drop an email to HK. Hopefully, the issue has already been addressed.