One of the most famous improbable plays in college football history was the Cal Bears kick-off return against Stanford when they ran through the band to score the winning touchdown. It made me think of plays the Hogs have had that would be considered so improbable that they may be considered historical. The two that come to mind are Joe
Adams punt return against Tennessee and the Henry Heave at Ole Miss. Those two plays are recent in the annals of Razorback football history. What other plays could be considered?

Unfortunately, two i would like to forget over a span of 4 decades involves the two orange clad u.t.'s.

I assume you’re talking about Clint’s fumble and I’m not sure of the other reference. Talking about a play from '69?

Miracle on Markham- Jones to Birmingham to Atlanta.

Nope it’s got to be the Henry heave. 4th down and 25. Hogs win. That’s more improbable than
The Miracle I Markham.

To my mind, the Hunter Heave was the most improbable. Joe Adams run was incredible, but not out of the realm of possibility.

Street’s 4th down bomb. Within context of that game was highly improbable.

if I recall, MJ has only completed two passes all game until that final drive. Which makes it even more unlikely. I was at that game and it was definitely an amazing game to be watch.

Somewhere in the top five would be the TD catch by the Immortal Teddy Barnes.

How this is not the first chosen only emphasizes the passage of time, not the significance of that play. I could not bring myself to tap the heart as a way to show support for the post. Only a broken heart would do.

Oct 18, 1964 - Hatfield’s 81-yd punt return at Texas.
Listened to the game on a small transistor radio with my Boy Scouts Troop somewhere in Saline Co. Will never forget. Must have been Bud Campbell calling the game.

I’ll guess Camp Quapaw near Benton. I was 13 and listening on the radio too (I’m sure). That’s my pick too.

That one was just before halftime

Not as dramatic as the game enders

The OP talked about improbable plays and that is why I picked the Hunter Heave. Now for significant plays, it would be hard to beat the Hatfield punt return.

Maybe not THAT improbable, or that significant, especially since we lost in OT, and in an early season game, with not all that much at stake. But what sticks in my memory was a Tennessee game in Knoxville. We had the length of the field to go, no timeouts, and less than a minute to go in the fourth quarter. Matt Jones (the other legendary Matt Jones

) rolled out to the right, right in front of me, both
DBs bit, and he threw over their heads for an improbable TD. All they had to do was stay back, or at least one of them stay back, a run was exactly what they should have wanted us to do, the obvious thing they should know not to do was come up and yield a passing TD in that situation. But Jones was such a running threat that the urge to come up must have been, inexplicably, irresistible. I shook my head in amazement and could not believe they did that.

That was huge. Wasn’t Richard Smith the Receiver on that play?

Yes, Richard Smith caught that pass. It is the school record for longest pass play. 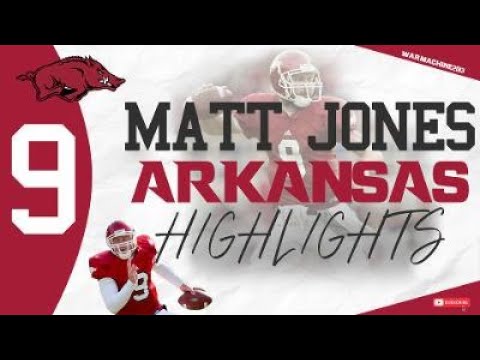 Another improbable play: Jerry Franklin’s 95-yard fumble return against Vanderbilt in 2011. It felt like Arkansas was about to lose that game, but the defensive touchdown and two-point conversion tied it, and Zach Hocker hit a game-winning field goal later in the fourth quarter. We don’t remember the 2011 season nearly as fondly without that game changer. 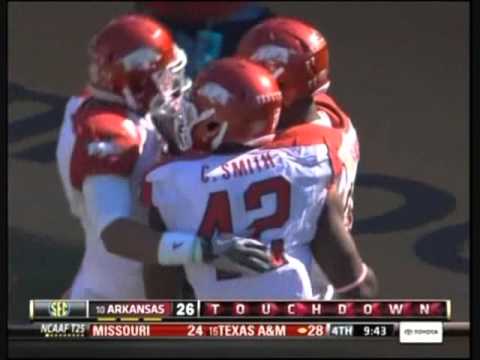