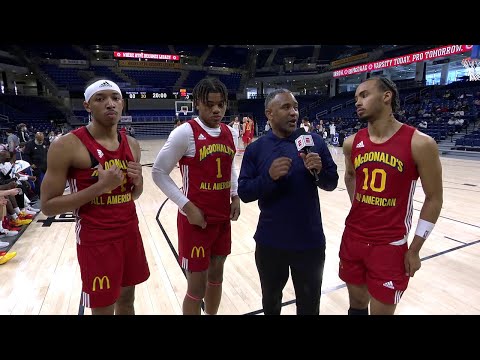 Not a great shooting night for Nick Smith had a couple of shots blocked but you can just tell he is so quick off the dribble he can get his shot pretty much anytime. Walsh made a highlight move to the basket for his only two points but made by far the best pass in the game with a left-handed 30 ft lead pass to Khalil Ware for the slam. Ware had a great practice got about 10 points shame we couldn’t get him. Black made a couple of nice passes missed badly on one three pointer but you can tell he’s a team player looks to get his teammates involved.

I guarantee Nick will show out tomorrow night, Billy. I’m not sure he’s not the best kid there. As far as Ware, I’ve said this before, but I think Muss can find a big in the portal that will help us more than Ware would next year. I still think young bigs take longer to develop. Ware is still a project. Muss is looking to bring in a MAN to help JWill next year, and I have no doubt he will. Go Hogs!

Yeah if you watch the practice highlights that I put on here and go to YouTube and watch some others you will see that Nick stands out more than anybody his shot was just a little bit off last night although he did make three or four shots. He is so good that we will only see him one year for sure. I’ll be shocked if we do not add a big from the portal. I don’t think Muss likes being in a situation to where if Jay will get some foul trouble he has nobody to put in and it really hurts the team… I haven’t seen Ware look this good in any of the other film I’ve seen of him maybe he was realizing he was up against the number one player in the nation possibly. We will see how he does at Oregon