Here are the contract details 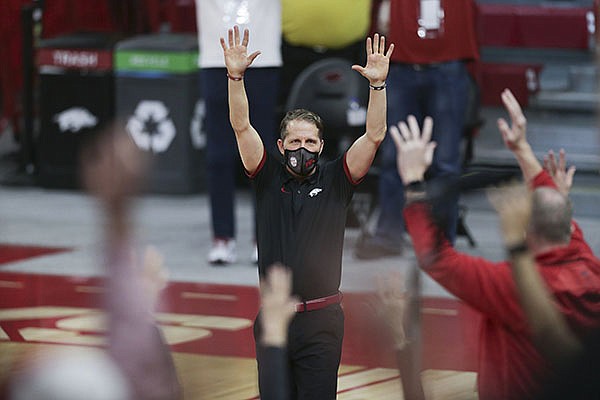 Musselman deal worth $4 million per year through 2025-26 season

The University of Arkansas announced Wednesday a contract extension for basketball coach Eric Musselman through at least the 2025-26 season.

So if he makes the Dance every year, he’ll be making $4.5 million after five years and have his deal automatically extended by two years (and probably will have another new deal by then). Plus incentives. And a retention bonus. Nice.

Yeah, but the buyout means he can have one foot out the door, on his end after next season.

The video clip on Instagram (with the Titanic music) made me laugh. These guys should have been marketing majors.

$2 million isn’t chopped liver for a buyout, especially if Other U has to pay him $5 million plus to get him. The list of schools that can go that high is very short.

From seeing the details it would look like University of San Diego after April 2024 is really the only school we have to worry about. I just get the feeling that he is not interested in any of the bluebloods.

I do with the higher buy out provision lasted a little longer.

It’s his alma mater, where his Mom lives, and youngest son attends.

It’s his alma mater, where his Mom lives, and youngest son attends.

I knew the first part, but not the second or third part.

I’ve seen a lot of contracts that have a provision where the buyout can be waived for certain jobs. Typically they are for a step up — like from offensive coordinator to head coach, or college head coach to NFL head coach or coordinator, etc.

Just so you know Greg, it’s not SDSU. It’s the University of San Diego

If he decides to go there one of two things have happened. He has accomplished nearly everything he wants to at Arkansas and he wants to finish out coaching there, or the bottom has dropped out and he is looking to leave. Either way at that point we as fans would be okay with it.

Just so you know Greg, it’s not SDSU. It’s the University of San Diego

Opps. At least they are in the same city, unlike when I screwed up West Virginia and Virginia Tech. Two different states.

The San Diego U thing (not SDSU) sounds like something Muss would want to do as a transition to retirement or as a much easier college gig.

Maybe he has a day dream about being Mark Few with surfing instead of fly fishing. One or two more good years here and he could have SDU near the top of a very weak West Coast Conference just by using his transfer portal magic and getting a few second or third tier SoCal kids/others attracted to the Muss mystique. He would get to live in San Diego, coach at a place where his production would likely always exceed expectations, and be able to work in an environment where all he has to worry about is coaching the team.

I think the big takeaway from the contract is that while you never say never, he’s unlikely to bolt for another major college job-this is probably his only major college HC stop. However, he is keeping his options open for a return to the NBA most anytime after next season. That buyout money is not going to scare off an NBA franchise.

I agree buzzard, I think he’s after a title. He’s gonna do everything he can to get it here. Then when he gets ready to retire, he’s gonna end his career where is started at San Diego and ease himself into retirement

I don’t see Muss going back to the NBA. One of the interviews he mentioned how the feeling of winning in college and the NCAA tournament is not reproducible(is that a word?) in the NBA. When you win it is just another day on the job, just like losing is. I really think he is addicted to that feeling and that excitement and he won’t ever get that in the NBA. In college the highs are much higher but the lows are also lower.

Is there, or will there be, a paragraph prohibiting (or a greatly increased buy out for) him leaving here for a head coaching job in the SEC?

Is there, or will there be, a paragraph prohibiting (or a greatly increased buy out for) him leaving here for a head coaching job in the SEC?

Yes. He has had a no-compete clause since he was hired. It is included in this contract, too.

I don’t think you can limit his NBA return to being a HC. I could see him going into some kind of player personnel role too. I don’t think he could go in as an NBA GM with his current resume, but he would have the chops right now to work in a lot of player personnel roles. Of course he could also do that kind of thing as a consultant while he watched the sun set on the Pacific Ocean.

Another successful year or two here and the man is going to have a lot of options to do whatever interests him the most. I can’t see him just walking away from the game, but I could see him deciding to do any number of different things when he hits 60-just because he can.

The names of the primary San Diego universities are confusing.