Henry shines in scrimmage, but starting role at TE up for grabs

Hudson Henry caught a pair of touchdown passes in Friday’s scrimmage, the first of the fall. But Sam Pittman says he doesn’t have any idea about who will start at the position. Here’s more: 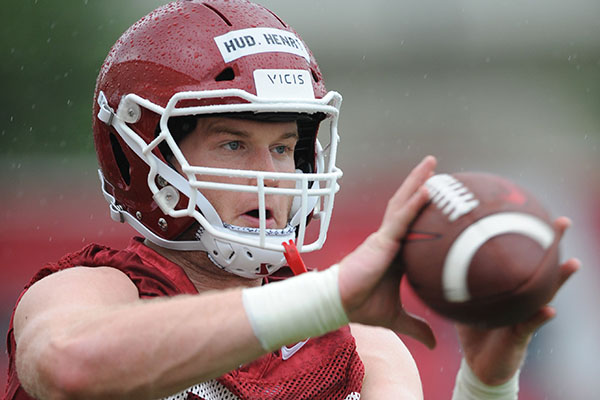 Henry shines in scrimmage, but starting role at TE up for grabs

Sam Pittman is certain about one thing when it comes to his tight ends: He doesn't have a clue who will start in Week 1 against Georgia.

Other notes from the scrimmage:

• Team went over 120 plays, half the scrimmage was situational

• Mataio Soli and Jonathan Marshall had a sack apiece. Deon Edwards had a fumble recovery near the goalline. Micahh Smith and Montaric Brown each had a TFL.

• Treylon Burks and Mike Woods caught TD passes from Feleipe Franks, and De’Vion Warren caught one from KJ Jefferson. It at least sounds like the QBs kept things pretty clean. There was no word on any interceptions.

Sounds like the offense had a great day but they have most all of their offense in and we really don’t know what the defense showed, so really hard to draw much conclusion from the scrimmage
Very good to see Frank’s throw the ball as well as he did though.