Henderson in the portal

Hate that Ethan couldn’t get on the floor more. He just never could turn the corner it seemed. I think he could do very well at a mid-major.

A rundown of his 3 seasons at Arkansas: 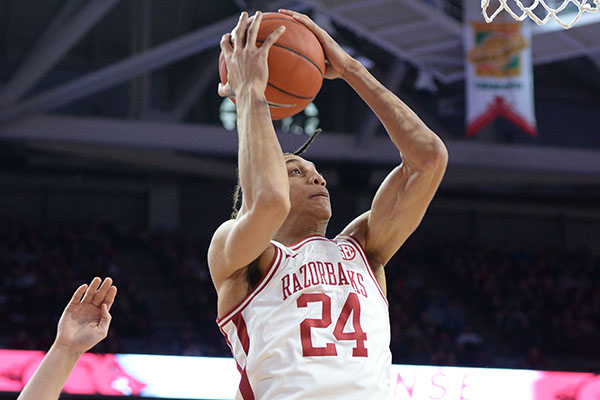 Ethan Henderson to transfer from Arkansas

He didn’t play a lot, but when he did he gave great effort. Best of luck to the young man moving forward.

Somebody will get a hard working basketball player that will probably turn into a fan favorite.
Just too much talent coming and going here.

I really respect this kid for sticking around as long as he did and being ready when his number was called. I hope he finds a great landing place and does well in baketball and in life.

I liked I him a lot as well. Really hope he kills it wherever he goes.

Long overdue. But never too late.

Hopefully, he will realize his potential with two remaining years of eligibility left. I can see a few SEC or Big 12 schools that don’t expect jump shooting from that forward spot, that can use his talents.

Gabe Osabuohien did quite well for himself. Hope Henderson does the same.

Henderson is the last Anderson recruit… no more holdovers. Wish him well.

Seemed like a great kid, also appeared to be a great teammate who always seemed upbeat and all about the team. Hard not to like that. Hope he excels in his new opportunity.

Henderson wanted to be a HOG! I respect him for all the hard work he put in and hope he finds a place to play! His energy and hustle was great but he just couldn’t stay connected on defense.
As other folks have posted a lot of talent headed out well sometimes to get better there has to be movement on the roster. That’s what we are seeing.

Perhaps, in time, the whole story here will be known. At this point, it seems to me that Ethan wanted to be a Razorback more than he wanted to play elsewhere. No inside info. Just a hunch.

I maintain the perspective that every team must have an 11th, 12th, and 13th player who embraces their role while providing excellent locker room chemistry. I have always viewed Henderson as the perfect 11-13th option, and have admired the attitude that he displayed.

Thank you Ethan for being a great Razorback and even better role model!

On a similar note…

The current environment of college basketball is here to stay. Rosters will turn over every year. Free agency will abound, for the good and bad that results from such player movement.

One effect will be players like Henderson will become extinct: guys who stay with a program for 3,4, or 5 years, and are content to be role players. Now, when the 9-13 players on a roster are new to the program in a given year, you can almost be certain they will leave at season’s end (either on their own or not).

Along those same lines, a thought for those of us who like numbers. It is highly unlikely that our career records - Todd Day’s scoring record, Sidney’s rebounding record, Pat Bradley’s 3-pt. record, etc. - will ever be broken. Those marks were set by players who stayed for four years, and players of that caliber aren’t likely to do that in this era.

kid played his heart everytime out there,wish him nothing but the best!

I could see the 3-point record falling, if you had someone who was a bomber and nothing else. Pros will take a 3-and-D guy but not a 3-and-no-D. Rotnei Clarke (speaking of a bomber) would have broken the 3 mark if he hadn’t transferred to Butler.

You could break Sidney’s rebound record in three years if you played 34+ games a year and averaged 10 boards a game throughout. Difficult but not impossible.