Heartbreak is worse when you’re the favorite

There has been a lot of heartbreak over the years in Hog nation. While we have won a lot of big games, the Hogs have lost more than their fair share of huge games. In all sports.

Most of those games saw the Hogs lose as underdogs. Which is bad enough. Especially in games like the Big Shootout. Or SEC football championship games.

But this game feels different. We were the favorites. Strong favorites. #1 in the country. The feeling I had after the game was similar to the feeling I had when the basketball Hogs lost in the 95 finals. Corliss, Scotty, Corey Etc’s last game. I was only 3 when the football Hogs lost to LSU in 1965. I am sure I didn’t really understand what was going on at the time. But a few ears later i sure understood. We had been on the brink of 2 straight national championships when we lost to LSU, snapping a 22-game win streak.

Yep. It hurts differently….worse probably….when you lose as the favorite. Certainly hurt worse last night. And you KNOW the actual baseball team….players and staff….feel much, much worse. As Clay pointed out, things just weren’t trending our way. Ice cold bats…and I mean ice cold…,among some of our top players was
the ultimate killer. And trying too hard doesn’t break a slump.

The picture of Patrick Wicklander sitting on the tarp covered mound after last night’s game is heartbreaking. You know it’s not just the loss of the game and season that’s tearing at him, but the end of a wonderful stage in his life. Soon all these kids will go their separate ways and will have fond memories, but now they’re full of all sorts of emotions—most that transcend baseball. 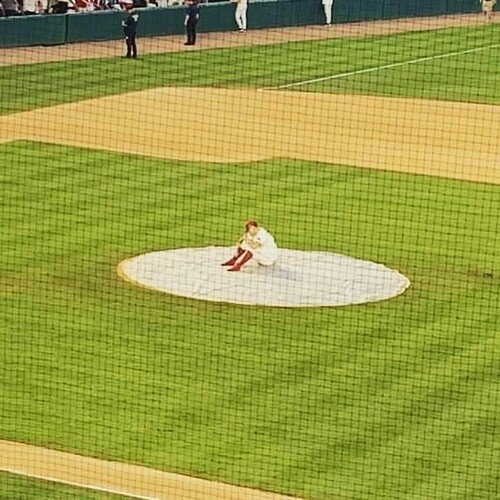 That breaks my heart.

I wasn’t alive for The Big Shootout, but the most pain I have felt as a Razorback fan was at the 95 Final Four, 2018 CWS, and last night. It’s not really hyperbole to say on all 3 occasions I felt like a part of me had died.

The 69 shootout was the toughest for me. I was a freshman in college and the week after was very difficult. I’ve learned in my 7 decades on this earth that losses are not worth ruining your week. But it was a hard lesson.

Yesterday’s game was a big letdown and I feel bad for those young men after such a storybook season. But the missed foul ball a couple years and lost Championship was worse.

I was only 10 years old when the big shoot out took place. But I was all Hog by then. My Dad went to Sears & Roebuck bought a new “color tv” right before that game.
First time I ever seen grown men so distraught, angry, miserable worse than I was.

The 95 Bball Finals wasn’t near as bad because we won it all the year before.

That is a matter of perspective, Jim. I can assure you we were devastated leaving Seattle with a loss, knowing that we were the better team, regardless of what we accomplished the year before. It’s very hard winning a National Championship in any sport, but it is damn near impossible to repeat. Repeating shows sustained dominance and excellence, and that is why Coach Richardson still laments that loss in 95. We all do and always will.

To add insult to injury, we had APEX jackets, ready to hand out in the lockerroom, proclaiming us back to back champs. I recently sold mine to Coach Neighbors. I am assuming he plans to use it as a teachable moment for his ladies as they ascend to prominence. You can’t take one day for granted. As Coach Richardson always said, “tomorrow is not promised.”

Every missed opportunity at winning all of the marbles. I know NR regrets that 95 loss in the finals. Probably has rehashed that scenario 1000’s of times till he was sick. (Just the way NR & most coaches are wired) What could he or they have done different to better prepare the team. Fact of the matter is, sometimes no matter what you do or a Coach does it boils down to - where are the players minds at that given moment.
Best teams don’t always win and as The Intimidator said the fastest car don’t always win the race.

This doesn’t beat the 2018 CWS for me, but I do feel bad for the kids because they worked SO hard to become #1 team, bought into the coaching staff, and then followed through with carrying themselves as a #1 team for so long.

Once the initial sting is over, my hope is that they recognize the amazing season that they had: SEC champions, SEC tourney champions, not losing a single series in the SEC.

I mean…considering the competition, that’s beyond impressive.

Just those accomplishments alone can sometimes take its toll over the course.
Maybe this year can be something the next great AR baseball team can use as a tool or reminder - “take nothing for granted” on their way to winning it all. That could be very very soon.

Definitely worse as the favorite. When you’re not supposed to be there, you can always take solace in just being there. But when you’re supposed to win it all based on months of performing as an elite team, it’s hard.

That’s the way I feel. They accomplished so much this year. It’s all about when you peak. Our bats let us down and they were trending down heading into the regionals. I am grateful I got to watch some great games this year.