'He did wonderful': On Trey Wade's presence and impact vs. Mizzou

Trey Wade had the best scoring night in his time at Arkansas on Wednesday vs. Missouri, and he was even better defensively. Only calf cramps late in the first half could slow him. 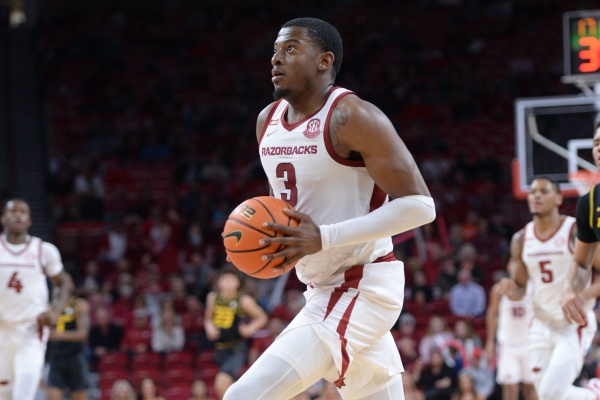 'He did wonderful': Wade a force in Hogs' 1st league win

The only thing that could slow Arkansas forward Trey Wade’s roll against Missouri on Wednesday was cramps in both of his calves.

What a game Wade had. This performance showed he can be the “big” we’ve been pining for. He was the primary defender on Kobe Brown, coming off a 30 point performance against Bama. He had Kobe so frustrated and out of sorts, it affected his whole game.

I’ve been high on Wade since the beginning of the season. He had multiple games like this at Wichita St. I know he had the early injury and it took him awhile to get back into basketball shape. He showed flashes in a couple games the last couple weeks, but the coaches hadn’t given him the minutes to show what he could do.

It’s a little disappointing that we didn’t give him an opportunity to show this 3 or 4 games ago. I just hope, going forward, they won’t have a quick trigger pulling him out over a mistake or 2. IMO, he can be that “tough guy” leader this team has sorely needed. He and Jaylin looked great playing together. I think they make each other better when on the floor at the same time. We hardly ever saw that previously this season.