'He can do it all': Burks already one of SEC's best

My Friday feature on Treylon Burks, who Jeremy Pruitt and Sam Pittman agree is among the top talents in the SEC: 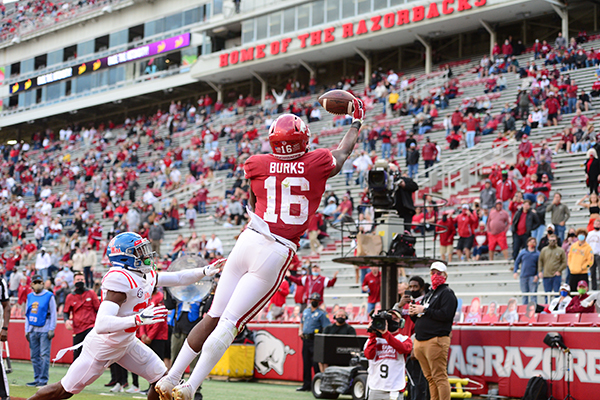 'He can do it all': Burks already one of SEC's best

Very nice story…but sadly, we seem to only have one story like this every 10 or 20 years, when many of our peers have 2 or 3 nearly every season.

Imagine if we had a great offensive compliment; like a Felix Jones next to DMac. Shoot, imagine Matt Jones and DMac.

I think Catalon’s a good one, but he’s on the other side of the ball.

Cubsesque is a pretty good term, but times have changed.

Imagine if we had a great offensive compliment;

I think most thought we had that “great offensive compliment” in Rakeem Boyd. Based on last week, he may be approaching 100% healthy. If so, we may have our 2 great offensive players these last 5 games.

we had that “great offensive compliment” in Rakeem Boyd.

We’ll see soon; he just looks a bit slowed to me. He had a burst last year; I’m not seeing it, now.