Have the MBB Hawgs peaked?

I don’t think so but one could argue that point. Peaked is doing things they did not do before. But they won and that is all that matters at this point in time. 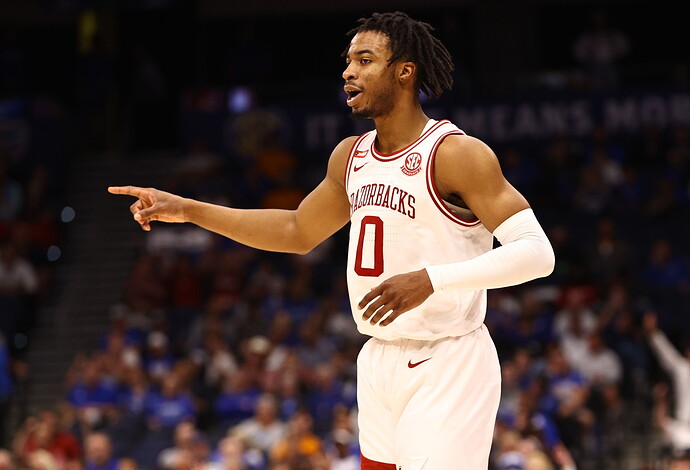 There were some things to like in Arkansas' opening win over Vermont ... and a few things that could result in a quick exit Saturday against New Mexico State.

The writer, Glenn Sattell, is shown to be from Florida. Perhaps he still has a bit of a sour view of the hogs because we rained all over those future suitcases down in Florida and you could say ruined their chances at packing up and heading to the NCAA.

Can’t say that for sure but it would certainly explain any negative slant.

We definitely aren’t playing our best basketball, and will have to play better to keep advancing, however so far, we’ve played well enough to get to the next game. That’s really all that matters. Maybe our opponent isn’t playing their best ball either. It appears if we can keep Allen scoreless NMST will score about 35 points, but if we let him score and shut everyone else down, they will still score 35 points. Maybe we can have our worse game of the year and still win.

That article is spot on. We have not been the same since the TN game.

It doesn’t mean the season is over, but it does mean we are more vulnerable than we were before the TN game, unless we start playing like we did before. And that means JD has to play better.

We have not been the same since the TN game.

Actually, we played well in the LSU game right after the TN game. Beat them by double digits, out rebounded them by 14. We had 14 offensive boards to their 6. I thought it was overall a very good game.

Yes, the last 12 minutes of the A&M game worried me a bit, but that got erased in the Vermont game when we came back from their early 2nd half run.

I believe we are still the team that ran through the toughest stretch of SEC games Muss has had since he’s been here. We came through that with a 13-2 record. We went 3-1 against the 3 SEC teams that finished above us in the SEC standings. Those 2 losses were on the road by a total of 5 points. We’ll find out for sure tomorrow night.

Well, 1) I don’t think Toney is full speed, 2) we’ve played some pretty good teams the last few weeks, 3) Vermont might be under-rated; they sure played tough last night, 4) Notae needs to slow down a bit the first 8 minutes and let the game come to him. Can we win more, I think its about matchups, we did not get placed in the most advantageous region.

Well we weren’t playing a typical 13 seed Vermont is more like a five seed who plays incredibly hard and is very well coached. That said they make a good point about us running out hard to the three-point line which made us vulnerable to the drive to the basket that’s a very valid point that’s what happened.

I also agree that we should have taken advantage inside as I kept calling repeatedly for us to get the ball to Stanley inside but we really rarely ever did.

But we won the game which is the hardest game to win in the tournament. We gained valuable experience and can gain from that I think you will see us play much better tomorrow, we will be much looser and I think we will shoot the ball better because of it

we should have taken advantage inside

I sure concur with that. I do not like Williams playing the 2 guard role.

Well it’s not often we’re going to be able to take advantage of someone on the inside. We could do that last night,we will not be able to do that against New Mexico state or probably anybody else left if we go any further because they all have rim protectors that are going to block a 6 ft 6 guys shot.
That was the whole thing last night we had the advantage and really didn’t use it properly and Muss even mention that after the game. He said I probably should have called more plays for Stanley.