Has 🏀 Team Arrived back in Fayetteville Safely?

Thanks in advance for your reply

Will be landing in 12 minutes

The team is flying into XNA. The drive back to Fayetteville might be more adventurous than the landing.

Most, if not all, of the streets in Fayetteville are covered with sleet. It began coming down hard at my house about four hours ago and hasn’t stopped. It took less than an hour for my street to turn white.

Looks like they just landed at 11:12.according to flightware

Now just get back to campus or homes safely.

That’s the worry for CEM. Let’s hope they all make it home safe and sound.

Regional airport Thanks to Clinton

Thanks to Clinton? I thought it was thanks to the Waltons.

I’ll guess that a lot of powerful people were involved in getting XNA approved and built. It helped Walmart for sure but was needed with the growth of NWA. Having flown into Drake many times, I was thrilled to see XNA opened.

That was an experience flying into Drake on “scareways” airlines

XNA is Northwest Arkansas National Airport in Highfill, just outside of Bentonville. Sometimes the team will fly into Drake Field in Fayetteville.

Look forward to the day when Southwest starts flying into XNA. It has been on Southwest’s radar here in DFW & apparently contemplated in future expansion of XNA.

I’ve been told that landing at Drake made you feel like you were going to crash into a mountain.

Don’t hold your breath on that one. 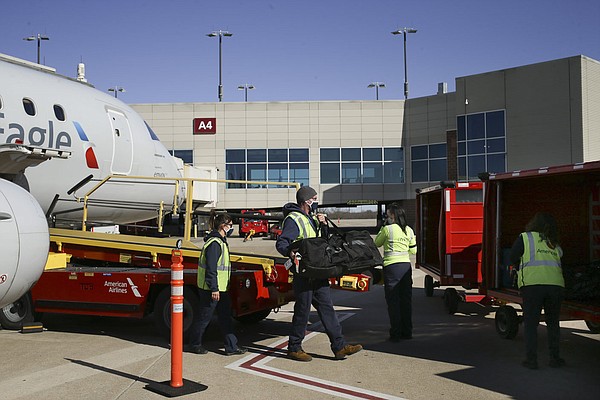 Southwest Airlines probably isn't interested in coming to Northwest Arkansas National Airport in the near future for business reasons, so officials are looking at helping the airlines they already have add flights and destinations. They're also...

Having made that flight on Scheduled Scareways (so named by Lou Holtz; “you don’t buy a ticket, you buy a chance”), I would have to agree. Coming over that mountain was spooky.

Scareways merged with Air Midwest in 1985. AMW thought that would allow it to feed flights into Republic Airlines’ Memphis hub. Republic went elsewhere, AMW found that Scareways was flying a lot of crappy planes that needed a great deal of maintenance, and that merger almost forced AMW into backruptcy. AMW was sold to Mesa Airlines in 1991 and shut down in 2008.

I use to fly Skyways often to and fm LR. I enjoyed it due to the route they took. I also used their charter service a few times. One night in '78 I remember well. I had to be away from home 1 night for UofA Weed tour that started in Fayetteville and worked its way down to Kiser 3 days later. Of course, that was the night my daughter decided to come into the world (a few wks early) so I called Skyways, met the piolet at Drake about 12:30 AM and off to Searcy we went… My daughter waited until I got there barely.

Republic (bought Southern) didn’t really go elsewhere from Memphis. They were bought by NW which later merged with Delta. Forms of both Mesa and Republic are still flying as “Regional Jets” with United colors and perhaps others. Mesa does a good job at that and has some pretty nice equipment (Skywest probably has the best of those).

Old Frontier that use to fly the Covair 580 into Drake was based in DEN. They went belly up. The Frontier today out of DEN is a different outfit, but with some connections to the old outfit.

How I got on this is unknown and mostly likely of no interest at all. Just shows how Fayetteville air service has changed. Oh yes, new Frontier as well as Mesa and probably Republic do come into XNA.

I don’t think Lou was the first to call it “Scheduled Scareways.” We called it that in the ‘60s when I was in school. I flew Skyways to LR and back one time. My left ear hasn’t been the same since.

Don’t hold your breath on that one.

COVID disrupted airline traffic & postponed expansion plans everywhere, including XNA. XNA pre-pandemic traffic & growth were already approaching, if not surpassing, LR, Tulsa, & Columbia. If & when air travel returns to pre-pandemic levels & growth, expect SW Air to XNA to be back on the table.