The latest from Sam Pittman on the status of Grant Morgan: 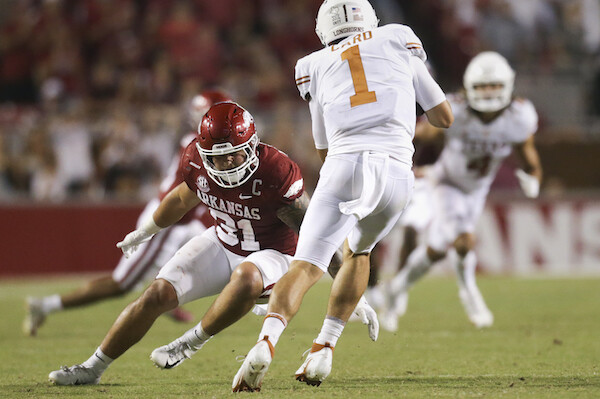 Do we know what type of leg injury?

They were examining his knee at least part of the time while he was laying on the field, but he went into the tent right away so you really could not tell for sure about the problem. I believe others on here said he had an ice bag on the knee after he came out of the tent, but there were too many bodies along the sideline for me to see anything but him walking around and talking to players and coaches.

I saw somewhere that it was a deep bruise. Which would fit with him walking around at end of the game with ice on his leg as Matt reported.

The kid’s a player. We need him. I’d rather miss him for GA So than for A&M.

I remember when football players wore knee pads. I don’t know if one would have protected him from this injury since those pads mainly covered the front of the knee. However, now it appears players all wear shorts that come down to just above the knees. I’ve heard that’s illegal, but if it is, it doesn’t seem to ever get enforced.

The kid’s a player. We need him. I’d rather miss him for GA So than for A&M.

Grant said this morning he “tweaked” his knee and that he expects to be OK. He said it is the same injury that caused him to leave the Missouri game last year.