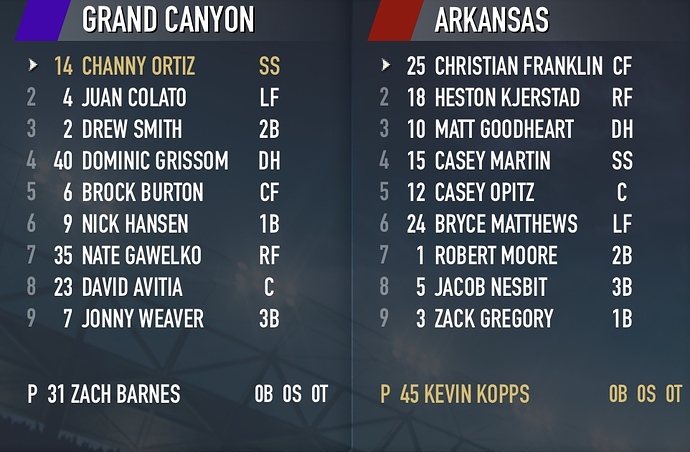 really like what I have seen of Bryce Matthews swing,he’s going to be a good one! hate Webb not in the lineup though.

Glad to see HK in the lineup. Guess the HBP wasn’t a major issue.

I hoped to see Webb in LF. Also I wish Austin was at 1B. Casey Martin May get a couple of errors today without Austin over there to scoop and snag those wild ones!

Way to go Kopps!! Gosh this guy is totally lost it! everything is up.but to his credit he rebounded to strike out the next three.

Kopps needs to grow back that mustache immediately. Kopps = Samson.

Hurts we can’t give Casey O a rest…

He sure don’t need to be starting! The next time he goes to the mound the hogs need to have a huge lead! Walk and a homer! Just horrible.

He’s a team captain. He certainly didn’t hit his spots early but came back strong. We just need to get our hitting shoes on.

Why would you throw Casey a 0-1 fastball?

Boom that away Casey!! That’s why you never throw him a fastball LOL he won’t see another one for 2 months

Good question…I figured all he would see was junk.

I’m not able to follow the PxP, did Casey Martin hit a homer? Score?

3-2 Hogs. Kjerstad singled, Goodheart walked, Casey swung at a breaker for 0-1 and then yanked a fastball into the bullpen.

If only pitchers would only throw Casey fastballs, he’d probably be hitting 400+.

That’s what happens when you put the ball on a tee for them Kopps… Grab you some bench for a long long time!!! SMH

Kopps and Wick need to get their stuff together ASAP

Kopps took care of that 3-2 lead giving up another homer! He’s done for the day! He needs to get his confidence back but there may not be a place for him to pitch on the weekend until he shows he can pitch!

This guy for them has great stuff! Just hope he can make another mistake