At just about the same time. Not actually sure which one arrived first.

One was seeing Isaiah Joe’s tweet that he was coming back.

Second was that my Arsenal Gunners (Arsenal Red #3151359) won their 14th FA Cup in an empty Wembley Stadium, beating @pjhawg 's Chelsea 2-1 on two goals by Pierre-Emerick Aubameyang. Who is about to become very, very rich; hopefully his money is coming from Stan Kroenke, the Arsenal owner who has his name on a brick on the Bentonville town square. Auba supposedly wants about $315,000 a week for a new deal. Give it to him. Please. The man can put the ball in the net (29 goals in all competitions this season).

The 14th FA Cup extends Arsenal’s record for most cup titles. There have been 139 FA Cups. The Gunners have won more than 10 percent of them, including four of the last seven. Remember that more than 700 English teams, professional and amateur, compete for the cup every year.

Congratulations to you and I mean it. I got my hopes up with a quick goal from Pulisic but I must say from the 15 minute mark, Arsenal dominated the game. I never liked Christensen as a defender and he supported my view yesterday.

You are right Aubameyang is big time and is going to be very rich. Chelsea backs and midfielders just could not stay with him.

I was excited to see Pulisic to start. But knew that was risky, Lampard has been saying that he didn’t think Pulisic was over his hamstring. Pulisic camp disagreed. So I always doubted his fitness because there was disagreement. However the fact that Lampard started Pulisic inspite of the doubts, speaks volumes of how far he has progressed.

I am going to use the fact that Pulisic was the first US International to score in a FA Cup final to get over my disappointment.

Arsenal did look great and beating the holders in the semis boosted their confidence going into the final.

The timing of Pulisic’s injury was really bizarre. Open with space to shoot, pulls his leg back to fire and the hammy pops. You could see him scream even before his foot hit the ball. That rash of injuries is really going to hurt in the UCL this week, but they’re in deep trouble against Bayern anyway.

Winning the Cup also puts Arsenal in Europe for the 25th straight year (UEFA Europa League), and knocks Spuds down to the UEL second qualifying round. That’s a double whammy any Gunner can love. I don’t think anyone else in England has been in Europe consecutively anywhere near that long. ManU missed Europe as recently as 2014-15. Man City missed in 2009-10, Liverpool in 2016-17. The Arsenal win also knocks Wolves out of Europe, but if Wolves win the UEL this year (currently in round of 16 with a road goal after first leg) they’ll be in the Champions League.

Yeah, they talked about that 25 year streak at length. Quite an achievement. That is one thing about Soccer. Unlike major US pro team sports, there are multiple opportunities in a year to win something big and feel good about yourself. I mean the PL, FA, UEFA, etc,

Yeah. Arsenal will even be in the Community Shield, playing EPL champ Liverpool. That’s on August 29, back at Wembley. Talk about no break between seasons.

I thought about signing up for ESPN+ as you suggested to watch, but in the end used something I’d already paid for, my Arsenal membership. They had audio stream on their app and I also followed updated commentary from The Guardian newspaper which refreshed every minute or so. Not ideal but it worked. The Guardian was 1-2 minutes behind the audio, it seemed. And by the end of the first half I’d already seen Pulisic’s goal and the PK on highlights.

I’ve seen one pundit today who thinks Auba is worth $630K a week. I wouldn’t argue but I’m not the one writing the checks. Apparently in addition to more money he’s asking for other signings to strengthen the team, which they need anyway. Eighth place sucks, even if they did close the season with wins over Liverpool, City and Chelsea.

Also saw that the UK TV audience for the Cup final was half of all British TV sets. That’s Super Bowl type numbers on a Saturday afternoon.

I’m new to the EPL, and picked Arsenal as my team because my best friend is an Arsenal fan. Yesterday was the first game I watched and I have to say it was a good one. I was also happy to see Pulisic score a goal. I hope his injury isn’t severe, but it didn’t look good.

I’m new to the EPL, and picked Arsenal as my team because my best friend is an Arsenal fan. 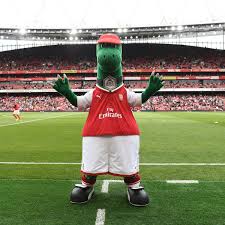 Welcome to Goonerland! I’ve added Gunnersaurus here just for you.

I’ve picked up arseblog.com as a pretty good Arsenal fan site with insightful commentary. Not afraid to let people have it when warranted, that’s for sure.

Haha good to know! Thank you!

Welcome to the Club. The Premier League and other competition around Europe is worth turning your TV on. Enjoy it.

I had forgotten about the Community Shield. 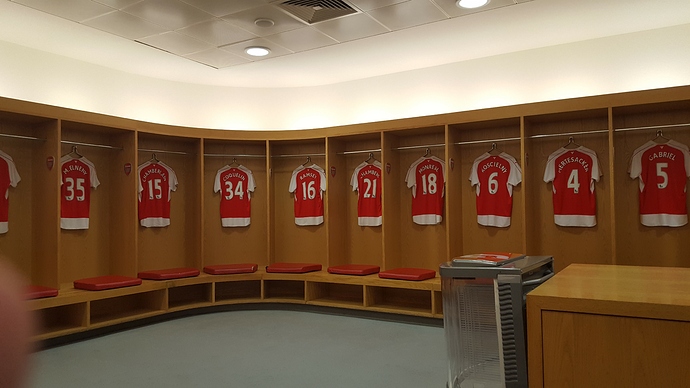 And from the Emirates changing room, April 2016. I was interviewed near Big Ben that afternoon by a German TV crew because I was wearing my Arsenal kit. They wanted to ask about Mesut Özil, then as now a controversial player.

The only jersey in this pic of a player still on the squad is Calum Chambers, #21, who tore his ACL in December against Chelsea. Elneny (#35) is out on loan and probably isn’t coming back.

Somewhere in my files I have another picture I took that day, of one of the banners hung from a balcony inside the stadium, which read gaygooners.com. I was trying to imagine how many heads would explode if a similar banner were hung at RRS.