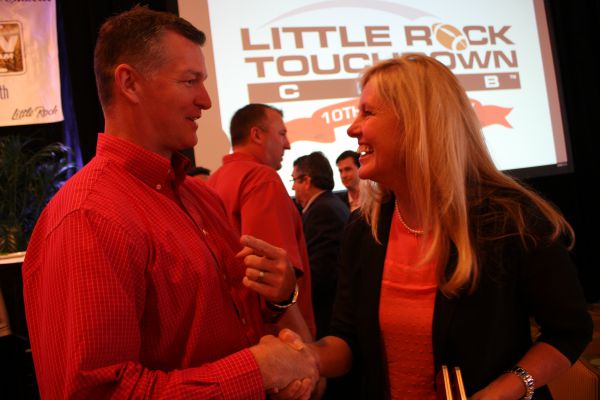 The person sitting next to Jamie Pittman at Sam Pittman's introductory celebration Dec. 9 might not have been familiar to the casual Razorbacks fan.

/Am I doing this right?

Sorry to disagree but Pittman was not taken as a serious candidate by HY or by about 95 % of the people on this board. There were a few who initially wanted him for the job and I was one of them but I got told by many that they would never hire him because of no head coaching experience. All of that is water under the bridge but I do think Judy Henry played a key role.

The thing that stood out in this article to me was that Pittman wanted the job and was not concerned that he was not the first choice. I also really respect his comment about the buyout clause. How refreshing is it for a coach to say I am not concerned with a buyout because I am not going to be a failure.

It’s nice to see that Coach Pitman wants to earn it! Working mans coach that wanted the job! I’m proud we finally hired outside the box!

I still think Kiffin was the main target for Hunter. If I remember right didn’t Hunter try to hire him at SMU? I think Hunter and Kiffin had a loose verbal agreement, then Sexton/Kiffin tried to play a bit of brinksmanship with Hunter and squeeze more money by using Ole Miss for leverage. I think Hunter got embarrassed in the media when this was “leaked” and decided it was a reflection of deeper character issues and he said “no thanks” and moved on.

As to where Pittman was in the pecking order, I have no idea. I’m currently happy with Pittman and hope he is wildly successful here at Arkansas. Although my coach of choice was Norvel, but that ship got sunk during the previous coaching search and was beyond repair.

I very early own asked if Sam was he a serious candidate, even said I would not mind rolling the dice with him because I know he can bring in lineman which is the only way we’re going to make progress with the rest of the league. I knew it was a long shot but I’m very comfortable with it