Going for it on fourth and 2

Since we have a football expert who swears Florida State made the right choice by going for it on fourth and 2 in the second quarter last night instead of kicking a short field goal, I decided to do some research and see who was right.

First, my memory was off. I was thinking FSU went for it from the 13. It was from the 8. Doesn’t make a whole lot of difference, but still.

Second, our “expert” may have been referring to NFL charts of when to go for it. College football ain’t the NFL, and the decision tree is different. So I found this chart of college football fourth-down decisions at Football Study Hall (he did his own research) 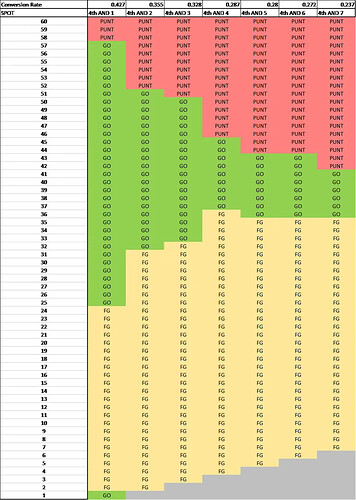 Basically, if you have a good kicker, you try the FG on fourth and 2 anywhere inside the 32. If your kicker sucks, adjust accordingly. FSU had already missed a 47-yard kick in the first quarter; whether Mike Norvell was thinking about that when he called a pass, I dunno. But a 25-yard FG is a lot different than a 47-yarder.

Then we get to the decision to kick for the tie at the end of the game. FSU had already blocked a 30-yard field goal, and I was a little surprised Brian Kelly didn’t go for 2 and the win, like Sam has done twice so far (Misery 2020 and Ole Miss 2021). LSU got the guy blocked who got the field goal, but another guy swatted the PAT; game over.

And then there’s letting the same guy fumble TWO punts…

I hope CSP and staff don’t use that decision tree. It’s an interesting analysis of a large data set of average success rates in various down and distance scenarios, but it doesn’t include factors such as score, time, in-game performance, planning, and preparation. I’ll take good, well-prepared, experienced coaches with “gut instinct” over analytics any day.

Personally, I prefer having a team that gets a first down on the previous play such that the decision doesn’t have to be made.

I do hope the same guy is fielding punts when we play the Tigers. I will need to watch the replay to see if LSU pulled to help with the first FSU kick blocker, and by doing so, diminished the blocking assigned to the second blocker. Would not be a surprise if they did, By LSU and FSU standards, we should have paid Chad Morris a great deal more money.