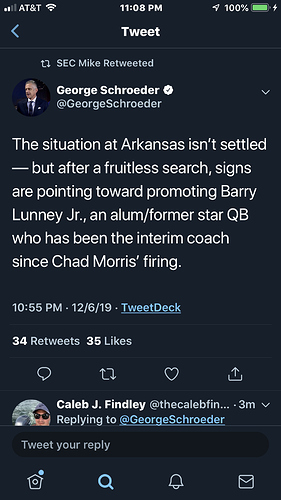 I want the names and where each BOT losers location. I live in Ft Smith.Like I said game set match.

Please say it isn’t so. If this plays out the HY needs to get the ax too

If this is the case then Lunney better have a hell of a staff in line—and I don’t mean the one he worked with last week.

Who the heck is George Schroeder?

National football writer for I believe USA Today. Native Arkansan with ties to the state still.

George is a solid reporter and person. He worked for our newspaper for a lot of years. I trust what he reports. He also reported, as we have, that Eliah Drinkwitz is still in play.

Man, it s hard to believe they had 3 weeks, and screwed this up so badly.

And got schooled by ole miss in less than a week.

I’m sorry, but maybe HY wasn’t ready for a big boy football hire, if he can’t handle the BoT.

we Won’t recover from this one, for a very long time.

we Won’t recover from this one, for a very long time.

Do you trust he knows what he’s talking about? If so, does it surprise you that this guy is reporting something I would have thought our insiders here would have known and reported first?

If we had intel solid enough to say Barry Lunney was the frontrunner, we would report it. Several of us have reported on Eliah Drinkwitz being a candidate, interviewing, etc.

I don’t get into this whole who is first thing. I care about being right and not having to backtrack a story down the line. It is why we might have been the only media outlet in our state that didn’t report Derrick Gragg was the AD two years ago. You might not get news first with our organization, but we make every attempt to make sure we get it right.

Thanks, guess I just believed that between you, RD, DD, and Clay, there is more access to the truth of the matter than Schroeder. (sp).

Of all the candidates, ED is probably one I would pass on for Lunney. Having said, here’s hoping there’s still a mystery guy out there - or in the fold, that will have us all excited upon his announcement.

My son works for Jr’s brother.

If we hire a coach with zero COORDINATOR experience, much less HEAD COACHING experience, I’m out. 100% out. I’m done with the mediocrity.

WOW!!! I like Lunney but not as the HC