Gamecocks had the music turned off after halftime (story) 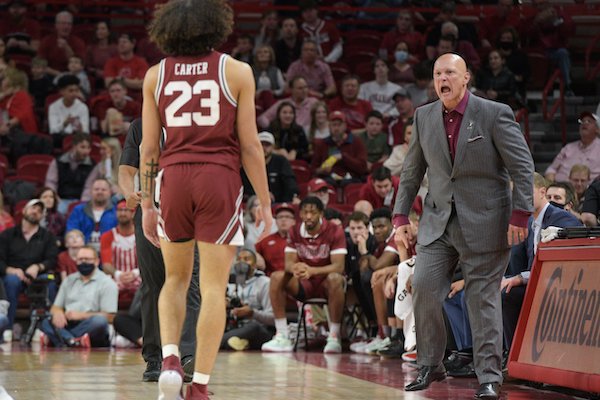 Gamecocks had the music turned off after halftime

With Arkansas football coach Sam Pittman in attendance, somebody turned off the jukebox in the second half Tuesday at Bud Walton Arena.

Now IMO have we not talked about a problem in shooting the ball? Or the 3?

It’s not just shooting it’s the 3 ball. So if we looked at this team and what record might be broken somebody might have said our 3 point streak. In todays game it’s seems like shooters are becoming better and better. So in the first 17 years the chances were better to break this streak. Now the last 16 years shooting the 3 ball IMO has produced better long range shooters.

The only streak that interests me is the 3 game win streak. I am a bit amused with the angst over the end of a 33 year streak of 3 ball baskets. To each his own though.

Spot on my man!

Still wondering why no Jaxon lately? Is it his D? He couldn’t possibly turn it over more than Devo or Lykes, plus he’s a better shooter than both.

The only thing I can think of is Muss is selling out on defense… I would like to see him get some more playing time especially if teams are going to start zoning us.

I am far from an expert on basketball, but it seems to me that all of the good to great Arkansas teams played outstanding defense. It’s fun to watch.

Halfcourt O was really solid last nite, for the most part. Good crisp passing, good movement w/o the ball. When Devo and Lykes came in was when things stalled becuz both players are ball stoppers on offense and turnovers waiting to happen. Maybe the 2 of them can get better, but I doubt it.

Jaxson comes into the game to make shots. Last few games he hasn’t made any. So what’s the point of him being out there? When you’re on the court, u need to bring something to the table, like knocking down shots with consistency. He’s not doing that right now. It will be interesting to see if Arkansas can keep winning with only one guard (Notae) getting most of the minutes in the backcourt. Devo and Lykes just don’t mesh well with the other players on the court. It might be time for KK to get an extended run again as the main backup to Notae at the guard slot. KK seems to be really close to making the rotation, but never seems to quite get there.

All I will say is Jaxon (and KK) can’t make any shots riding the pine. I’m not sure why Devo and Lykes have such a long leash, and KK and Jaxon don’t…not to mention they are both much better shooters. But we’re on a winning streak, so it doesn’t matter what I think.

Time for KK to come off the pine, imo. If Muss is going to continue with one guard lineup getting majority of minutes, JD needs a backup. Why not KK? Seems to be more in sync with his teammates than either Lykes or Devo.

I 100% agree. Unfortunately, most of the posters on this board are content to push KK into the portal. I am not. The kid can play. I truly believe that. Film don’t lie. And before anyone attacks, I’m talking about his high school film…the reason Muss wanted him in the first place. The same film that had him rated higher than Moody.

Does this mean that Muss does not know which of his players are best for the team? I am sure KK is a good player, but I can’t believe that if Muss thought he would be better for the team than what is out there, he would be playing. I have no idea. I have not seen one practice and only games on TV. I do know that those on the floor now are not good shooters at distance. Maybe KK is not good at defense or does not follow the game plan or something like that. Again, I have no idea, but have to believe in our coaches.

I remember a funny story Van Eman told (tells you how old I am). All of us smart fans kept wanting some player on the floor and were calling his name. Lanny said he wanted him too, but he was in the Hospital in Fort Smith. Does not address the KK issue, but does say we do not (almost never) know the whole situation.

Fair enough, Jim, but KK was very close to being a 5 star that everyone wanted. Besides his injury, what has changed? He looks healthy now. I have no idea how practice looks, but how in the world could he play the point any worse than Devo or Lykes? At least his stroke is pure. I’ll leave it up to Muss to figure it out, but I would sure hate to lose him. Lykes was a one year rental. KK could really thrive next year. JMO, and I am prepared for any hate mail, lol. I am not ready to give up on KK. Period.

I don’t think it matters what any of us think. I’m not trying to push him to the portal.

But, unless something changes, I just think it seems headed in that direction. Coaches speak via playing time and KK’s getting mostly DNP-Coached Decision at a time when the PGs are struggling and TOs are a big issue.

That seems to suggest Muss does not consider him a can’t miss player. Otherwise, why isn’t he playing?

Lykes has been awful. Devo has been up and down. And, still, KK is barely getting more PT than the walkons.

That tells me Muss has a different opinion than the rankings.

KK’s had his moments. You watch old video clips of him and he was fantastic in high school Tbh, I think he’s a more talented player than either Devo or Lykes. Why he’s not showing it at Arkansas, up to his point, I don’t know. Watching him on the sidelines, he still seems invested in the team, which is good to see.