Game day could be worse

The footprint for a round stadium is huge.

It’s never come close to a sellout; the record crowd was 104,859 for the Indian championship match, with the local team winning the title.

Getting back to my original topic, I’m afraid a 90K RRS would be about as bad as Beaver Stadium is.

I haven’t had problems too often getting away from RRS. Used to park in the stadium parking deck then headed north on Garland from Maple. Made a point of arriving early to park at the top of the ramp headed toward the exit. Now that I no longer have season tickets, I prefer to park east of campus or north of Maple. Do not like parking west of the stadium at all.

OK, I am a bit short. Wasn’t that a fraternity some years ago? Did UA not own that property?

And, at $12M, UA is not going to be able to afford buying it for their own uses.

I bet UA eventually wants to remove the adjacent roadway to RRS…if they can figure out how to route traffic otherwise (Razorback Road). Might keep Stadium Drive as the primary north/south and renovate/expand the west side.

Considering that they are working to four-lane more of Razorback road now, that seems highly doubtful.

I’m not aware of any fraternities that have been on Oliver Avenue, but then I never went up there when I was a student so I don’t know what the heck was up there. 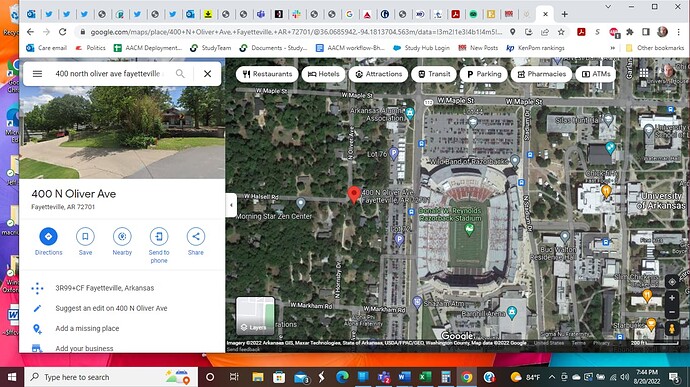 Swine, not up that far, sorry, I may not have been clear. Farmhouse was where the Alumni Center is, or close to that location. Another, too, but I forgot their name…or it was a former house that was just a flophouse.

AGR was where the Alumni Center is now. Farmhouse was/is on Arkansas Avenue.

Of course, can’t believe I got that wrong. Thanks for the correction.

Everyone is gone when I get through writing.

Old picture. A&M has closed in that other end zone which means even more of the capacity behind the end zones.

Swine…you know that I go out of my way to avoid getting you upset, and I’m not trying to do so now…but…didn’t you read this in my post (that you were responding to)?

I know that the picture below is not the most recent (of Kyle field) but I chose it because it gives a very good perspective on just how many EZ seats they have there (and these seats have not moved…they just have a mirror image in the other EZ now).

they just have a mirror image in the other EZ now

Not exactly a mirror image, Dave. unless their mirror is cracked.

Not exactly a mirror image, Dave. unless their mirror is cracked.

This is so typical of you…lol

The main point is that I had proactively acknowledged, in advance, that it was an old picture…you apparently missed that, based on your (initial) response…which begs the question of whether or how much you read the text in my first post, or just responded to the picture? And, while “bookend” might have been a more technically accurate term to use, the fact is that they have a very similar structure in the other EZ now (as compared to the picture I posted), which I ALSO acknowledged in my post (and you also missed, based on the fact that you brought that fact up in your response). Who really cares if they are or are not EXACTLY mirror images of each other. I think anyone (else) reading my post understood that.

So, instead of acknowledging THOSE mistakes on your part, you point out what is, at best, a minor point of semantics in my OP. Why can’t you ever just say something like “I guess I did” (when you make a mistake) and leave it at that, especially when that’s the best and most correct answer?

You ought to try it sometime. I have, and it’s liberating!

This is off topic, but I flew from DFW to Montreal a couple weeks ago. Our flight path took us almost directly above campus. Was fun looking out the window and seeing RRS and the rest of campus from 30,000 feet up.

Why don’t i just give your diatribe the response it deserves? Total derision.

@SwineFusion and @wizardofhogz aka Jeff and Dave. Will the two of you just grow up and ignore each other? Please.

One of those two drinks too much coffee. Guess which one.

Baumbastic said it well. On the positive side, both bring some great content to this site.