Game day could be worse

We all gripe about the traffic and so on for a Fayetteville game day.

Consider State College, PA, where the crowd at Beaver Stadium (capacity 106,572) is more than twice the population of the town. And there are no interstate highways.

It’s so bad people just give up and sleep in their cars after a night game. 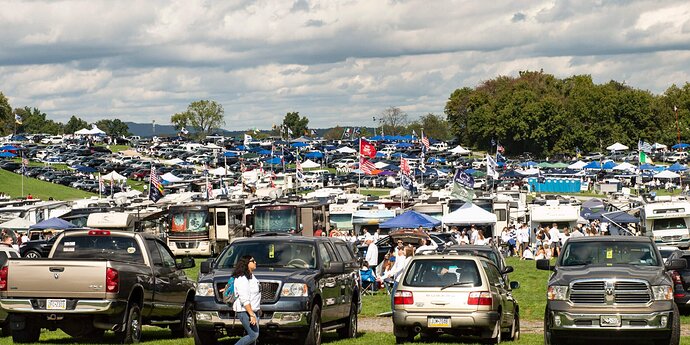 Penn State's Beaver Stadium is one of the largest in the world, but it's famously tricky to get to — and leave. These are your stories.

Bizarre Beaver Stadium trivia: Its original site was about 1.5 miles away. In 1960 they dismantled it (it was steel then, much like a good bit of the original RRS) and moved it to its current site. Capacity at the time was 30,000; they added 15,000 seats as soon as they got to the new site. During the 1978 expansion they raised the entire stadium on hydraulic lifts, took out the track and built new seats under the old structure.

This story reminds me a little of my only visit to Tiger Stadium at LSU, for the 1981 Bama-LSU game. Capacity was about 75,000 then and I don’t think it was full (LSU sucked at the time), but it took us more than two hours to get out of Baton Rouge.

This looks like a good post to hear some stories of worst traffic experiences at a football game. Mine would be in 1982. The season opener Monday night game with Pittsburgh at Dallas. I was fresh out of college and lived in Tyler TX at the time so a buddy and I had rounded up some seats, lower deck about the goal line and we were extremely excited. The game kicked off at 8 pm. Tyler is about an hour and a half from Dallas. We figured leave at 3 pm so we could stay ahead of the 5 o’clock traffic and get to the stadium for a couple of hours of tailgating. We left and were flying down the interstate. Everything was going as planned and we hit the east side of town around 4:30 and it started getting pretty thick but we made our way downtown about 5:30. At that point the nightmare began. We would sit 15 minutes and then move 15 feet. Now it’s coming up on 6 pm. We had to get to Stemmons Freeway to get to the stadium. Finally reached it and it seems like we even got our speed up to about 40 for a minute, then came to a dead stop. Game traffic and it’s as far as the eyes could see. We crept along with the stadium barely in view and finally reached the split to go north of the stadium for parking. It’s coming up on 7:30 and we’re sitting just to get to the parking lot. Finally get up there and we had to park as far back in the public lot as you could get. It’s almost 8 and we are running as fast as we can. By the time we reached the gate and up to our seats, it was about middle of the first quarter. Dallas lost the game and getting home that night was another 4 - 5 hour ordeal. Oh well, maybe we should have left at 2.

TCU used to have terrible traffic after a game. I have not been there in years so maybe it is better now. And getting from Clemson to the Interstate was at one time a problem.

This is what Beaver Field looked like before they moved it across campus: 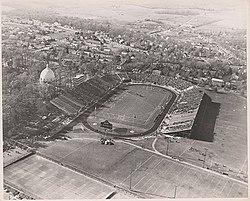 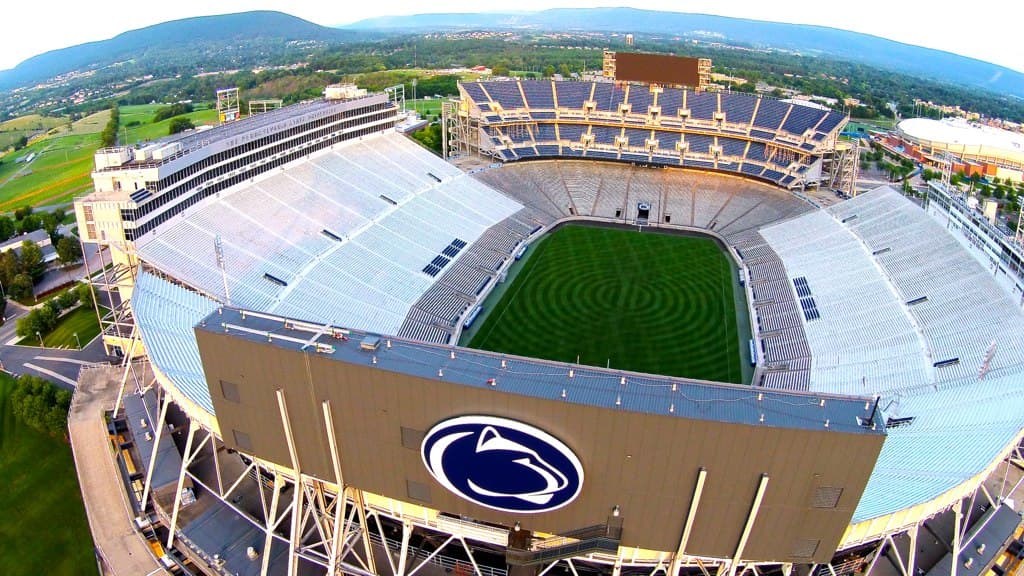 Both images borrowed from Wikipedia

I’ve always thought Fayetteville isn’t too bad if you know the city streets. That isn’t to say you won’t hit some congestion or need some patience, but it beats relying on Razorback or MLK.

And that is exactly why I like my Lot 56 parking. Once I get out of the lot and head south on Stadium Drive, I’m good. Getting out of the lot can be a bear.

Just don’t park on the hill west of the north end zone near the intersection of Gridlock St and Stationery Blvd. Spent most of the night there after the Texas game last year.

Use the back streets for your exit!

Have recently read where Penn St administration has performed studies & reviewed cost of replacing or renovating parts of Beaver Stadium. Apparently the piecemeal additions & age have made parts of the stadium structurally questionable. Assume if they build a new stadium, it would be located at its current site - same as aTm did with Kyle Field. Regardless, Beaver Stadium is a great venue for games.

If I was a fan, I would park around Dickson St. You can usually get where you’re going without major delays.

Apparently the piecemeal additions & age have made parts of the stadium structurally questionable.

We know some of it was dismantled and moved in 1960 and jacked up in 1978. So yeah, I can see that. I would be a little leery too if the lower level west stands at RRS were picked up and moved to Farmington.

They have Populous, the noted sports architecture firm, looking at what to do with Beaver. Populous did A&M’s rework at Kyle Field. (Populous also designed Baum-Walker, the Smith Center, the basketball practice center and the NEZ project) 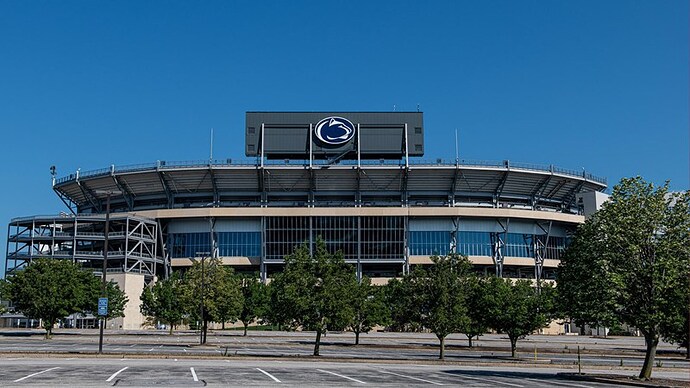 UNIVERSITY PARK, Pa. – Penn State Athletics and industry leader Populous have begun work on the next steps to determine the future of Beaver Stadium. This planning

Penn State also did an acoustics study to figure out where to place the student section to maximize their noise making capacity. Very cool. Of course, they have a great acoustical engineering program, or did at one time.

Taking back roads to exit the RRS area reminds me of trying to avoid a speeding ticket in HS. Turn here, turn there. Eventually, someone follows you and then someone else. The next game, they beat you to the route and have people following them. By game three it is now the plugged up exit.

RRS is handicapped because you can’t really go west “officially.” Up the hill on Razorback to Cleveland and then down the hill to Sang, technically is west, but that is one of the most congested exits I know of. Used to be the secret way out, too, many years ago.

RRs is further handicapped by the hills going north (and that there is limited parking so you might walk all the way to the Old Mr. Burger before you find a spot in a yard). The hill getting onto campus so you can go down the other side onto Dickson is a tough one. It is so long, and the route so circuitous, it is hard for me and I’m still somewhat young-ish and in shape-ish. A few more years and that will no longer be an option, though.

My mom and I have long discussed her regrets for not buying a “fixer upper” behind the stadium to the west. There were several of those over the decades that sold for a modest price and are now goldmines. Goldmines with close access to the stadium! The problem is not solved, though: someone gets to drive the golf cart down to the stadium to drop folks off and then go back and park it. Then, leave the game, get the cart, and start hauling folks back. Meanwhile, hope your golfcart isn’t blocked in by some drunk who thinks your driveway is a free parking spot. Getting out of your house to go eat, run to the grocery for supplies, etc., has to be carefully planned on game day, too, or you struggle with access to your own home.

And that is exactly why I like my Lot 56 parking. Once I get out of the lot and head south on Stadium Drive, I’m good. Getting out of the lot can be a bear.

How do I get out of Lot 56, heading south on Razorback? I have yet to find a way to do that (I am sure it is me being stupid). Every exit out of 56 I have tried ends up forcing me onto MLK, sometimes even going east on MLK.

Since I want to go East on MLK, I’m going the right way. I drive up to the intersection with Hill Street (where Brenda’s Bigger Burgers used to be) and then I’m in the neighborhood.

According to this, you should be able to exit onto Razorback Rd going South. 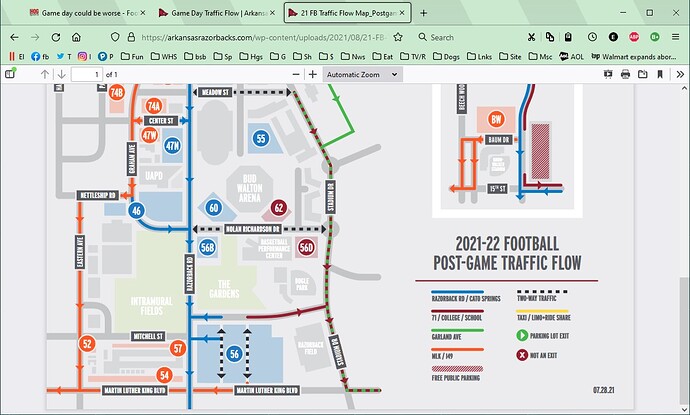 They have Populous, the noted sports architecture firm, looking at what to do with Beaver. Populous did A&M’s rework at Kyle Field. (Populous also designed Baum-Walker, the Smith Center, the basketball practice center and the NEZ project)

And apparently, the study is still on-going… 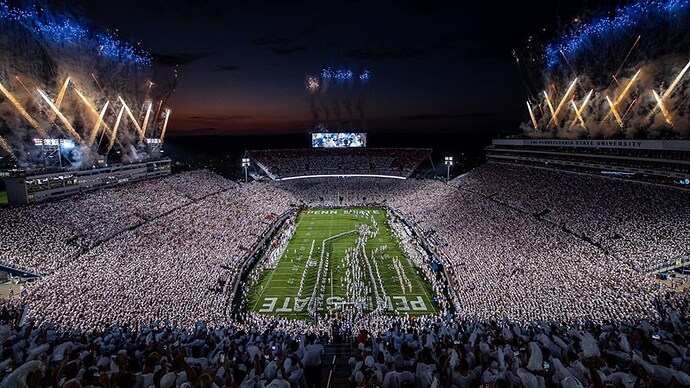 As the next phase of the Beaver Stadium Concept Study, Penn State Athletics has announced it will partner with CAA ICON and Populous on a survey to further evaluate

Have you ever noticed that, for many of these mega-stadiums (over 100K), it seems as if most of the seating is in the EZ areas? I know that the picture below is not the most recent (of Kyle field) but I chose it because it gives a very good perspective on just how many EZ seats they have there (and these seats have not moved…they just have a mirror image in the other EZ now).

It’s great to have 90-100K capacity, but I feel that our stadium feels intimidating (when full) and 76K is fine with me. I wouldn’t want to sit in most of those EZ seats at the Aggie Stadium. 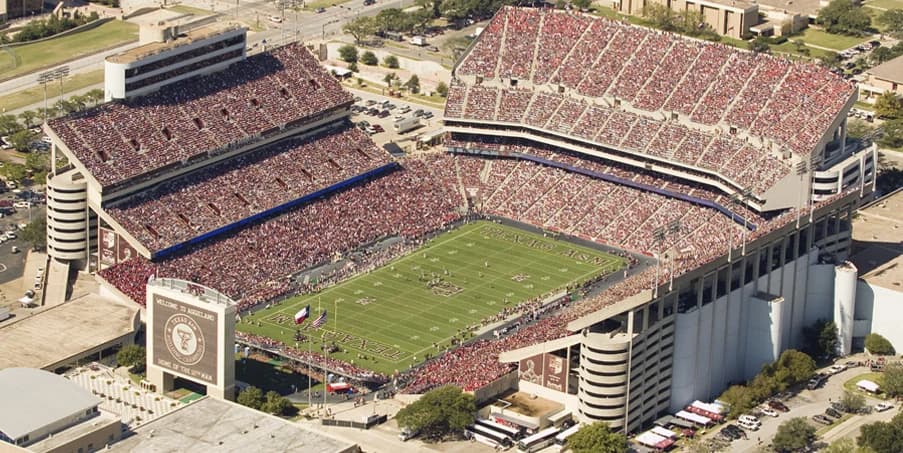 Old picture. A&M has closed in that other end zone which means even more of the capacity behind the end zones. 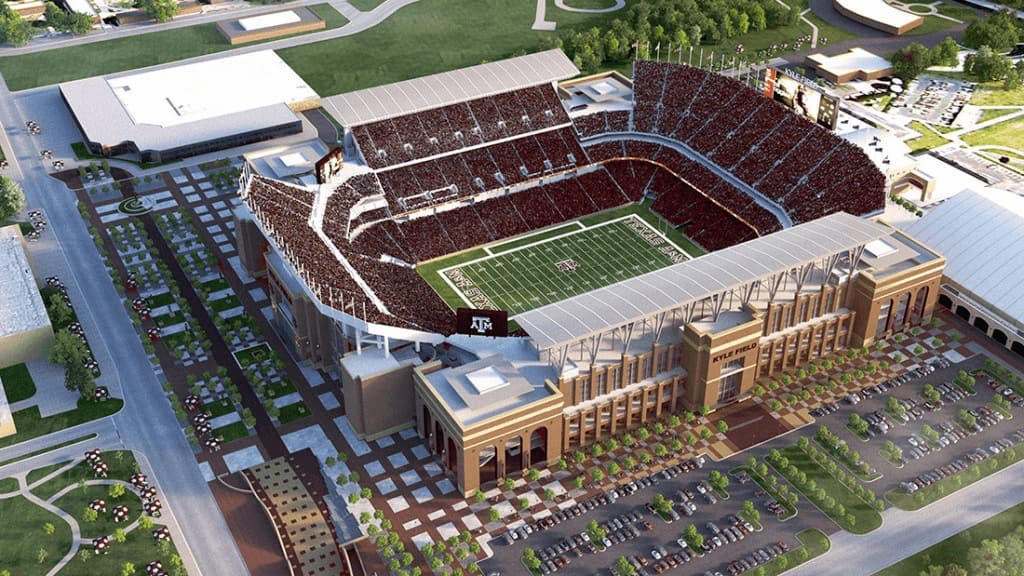 From what I’ve seen, the Penn State renovation would actually reduce capacity a smidge to 103K or so.

Dunno when or if we’ll ever need it, but we can close in that gap in the northeast corner and put seats on top of the SEZ. Depending on how high we went on the south end, that might get us to 85 or 90K. Or we could do what Georgia did and put a third deck on the sidelines. With the confines of Razorback Road on the west, it would either have to be on the east side or hung out over the road, which would be a little scary. 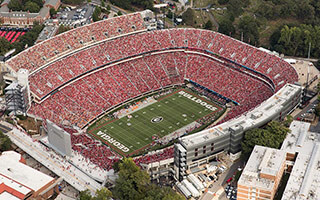 Had a thought. The world’s largest stadium is now a cricket grounds in India (also designed by Populous). Wonder if any college would have enough demand/be crazy enough to go to 133K and top this one? 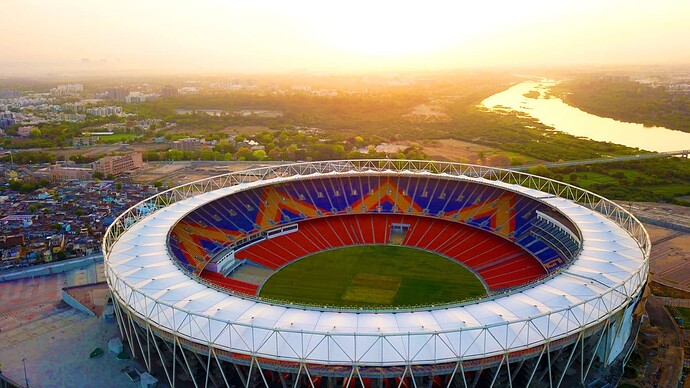 I’ve read that when the Big House at Michigan was built, Fielding Yost insisted on putting pilings that would support a future upper deck. That might be the most likely candidate to top the Modi cricket stadium.

The footprint for a round stadium is huge.

I bet UA eventually wants to remove the adjacent roadway to RRS…if they can figure out how to route traffic otherwise (Razorback Road). Might keep Stadium Drive as the primary north/south and renovate/expand the west side. It is the least inviting part of the stadium.

The cost of acquiring property to the west of RRS makes it impossible. Million dollar homes, in some cases, not to mention recent renovations and constructions that make anything beyond a re-route of Razorback Road impossible.

Had the conversation with a friend since this thread opened - we remember trying to figure out if we could afford (early in adulthood, post-graduation) to go in together and buy a fixer-upper west of the stadium. We still can’t because they went from borderline affordable to coveted properties. Wishful thinking.

We still can’t because they went from borderline affordable to coveted properties.

Then there’s this listing. Still on the market if you can scrape up $12M.