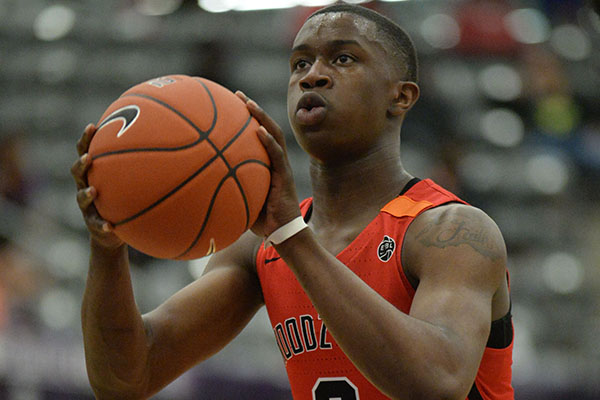 Arkansas 2020 guard signee Davonte Davis has put up numerous triple-doubles this season and is pushing toward a Class 5A state title.

Dudley, what were his stats last night in the win against Greene County Tech? I can’t find it on line.

You’ve asked about GCT a lot and I think you’re from Paragould, so I will add some stuff because otherwise I know none of it will get posted, here.

Zane Butler scored 33 for GCT vs Jacksonville after scoring 36 in a win Thursday over LR Christian and Layton Blocker and Creed Williamson in the 1st Round.

GCT trailed Jacksonville by 22 in the second half and cut it to 3 with 3:38 left but ultimately couldn’t overcome a 46-18 rebounding deficit.

Butler only guarded him about 1/3 of the time (and only after Tech was down 15). and really slowed him down, but it ended up being too late.

Devo’s stats when Zane guarded him were:

4 assists, 2 of those on simple passes, not him driving or making a play

For what it’s worth, Davis didn’t guard Zane. He got stuck on him once and Zane took him to the rim and Davis fouled. That was the only time Davis guarded him. The rest of the time Jacksonville had a better defender on him and also bracketed him.

I’m not trying to minimize what Davis did. He had a monster game. I’m just providing detail because many pitted this as Devo v. Zane and several online were saying that it wouldn’t be competitive and Devo would guard Zane and shut him down.

It ended up being a very good game and matchup.

I watched Devo against Marion tonight. He is a playmaker, but he has to cut down on the turnovers at the next level.

He probably had double digit tonight and 7-8 in the 4th quarter when they almost squandered another big lead.

Thanks Adam. I know Zane is a really good player and is going to play at the next level. You got any inside info on where he’s leaning? It may not be something an uncle wants to answer so if not that’s ok. He sure is fun to watch!