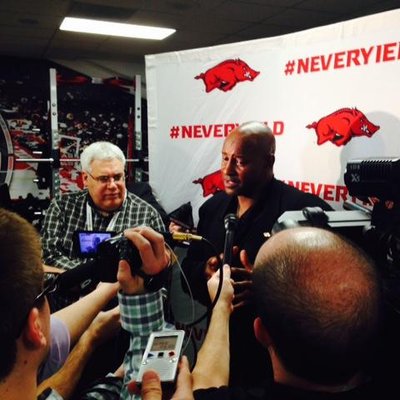 The greatest pregame report in the history of TV https://t.co/KYKNP9rQsF

He’s looking a little long in the tooth. Then again, so am I as compared to my 1981-ish look. Funny dude. Always thought a lot of him as a basketball player too.

Scott Hastings is great. Meet him a few times at things in Denver and he seemed like a nice guy. Cracked me up with his stories.

I had a speech class with Scott and Brad Friess at UA. When they showed up (which wasn’t often), they were hilarious.

Scott has always been one funny dude!

I remember seeing him celebrating with the US Ryder Cup Team in 1993 at the Belfry in England. He was wearing American flag clothes and was out on No 18 green with the team after the US won! It was hilarious to see him not only at that venue, but being one “of the guys”. I have no idea who invited him to hang out with the team.

Seems I remember he was a High School Tennis state champion. A man of many talents!

Seems as though Scott has been forgotten among the list of Razorback stars, but he was an accomplished player, bridging the gap between the Triplets and the Klein/Walker/Robertson era.

I seem to remember him making a winning shot just over the tips of Olajuwon’s fingers in a win against Houston. Anyone else remember that? • Arkansas 67, Houston 66, Jan. 23, 1982: Scott Hastings made a long, game-winning shot over Akeem Olajuwon in the closing seconds.

One of my best friends since age 17 and a groomsman in my wedding.

Oh, the stories would could tell on each other, but won’t.

I loved him as a hog, and the Denver area has loved him for decades now. Seems like a great dude, I’d love to have a beer or 3 with him

Did you have to maintain the l.p.s?