And all other UA sports events on 21-22. Expected, but now confirmed. 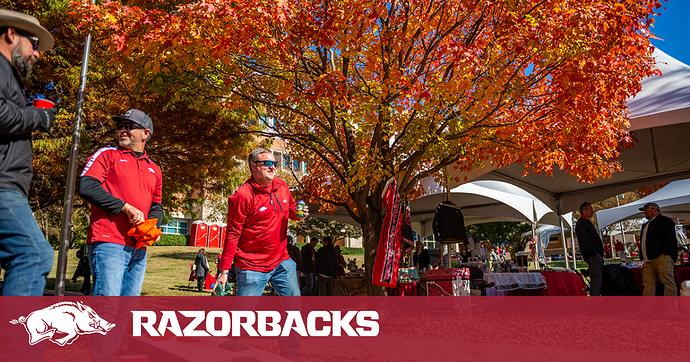 The University of Arkansas plans to return to full capacity this fall inside Donald W. Reynolds Razorback Stadium and at all athletic events.

Yeah, doing anything to get ticket sales up, they’re they worse I’ve seen in 20+ years.

Yeah, that’s what back to back 2-10 (0-8) seasons followed by a year+ of Covid will do to a football program’s ticket sales. However, I believe the “light at the end of the tunnel” is now actually sunshine and not an oncoming train. Better days ahead.

Start winning. Easier said than done. But that’s what needs to happen. See baseball. See basketball. We can get 76,000 fans there regularly if we can beat someone decent and win 6 or 7 games this year. Let it happen….

Baseball and basketball have had some recent success, especially baseball the past 10+ years. I’m not sure 6-7 wins will get 76k in there every home game. As a long time season ticket holder, I hope so, but I’ll believe it when I see it.

The Rice & GA Southern games may be difficult to get 76k but would also think fans would want to attend those games after cabin fever from the pandemic & based on positive outlook for a Pittman coached Hog team live. I will be making the drive from DFW to attend those & any SEC games in Fayetteville this season based on ticket availability. If we look solid & manage to beat ut, would expect strong ticket sales throughout the season. Wish they were all night games.

The daytime kickoffs for Rice (on Labor Day weekend) and Georgia Southern in what is likely to be very hot weather are not helpful to drawing big crowds.

I don’t understand the Rice kickoff time. It was my understanding that games on ESPN+ would have their kickoff set by the school. Matt, or somebody that has Hunter on speed dial needs to ask him about that. I understand the GA Southern game is on SEC Network and they set the time.

Hopefully they will change the Rice game time to night

The metal RRS will be a hot oven for the early season games. Even the 6 PM kickoffs are hot until later in the evening. Other than the ESPN schedule, can’t imagine daytime scheduling in early Sept. That will definitely impact attendance.

We played day games exclusively in RRS for many years, including early September. The Citadel disaster, for one. Didn’t start playing night games until 1997. Somehow we survived.

I figured you’d be all over the “climate change” color me surprised. As a student, I don’t remember very many early season games at Razorback stadium, it seemed they all were night games in WMS. I can remember a Tulsa game early in the year, but I think it rained, lol.

The temp at the Citadel game was 83, one can only hope it’s that cool against Rice.

Citadel. Ugh. Only time I ever walked out of a game yelling to fire the head coach.

The temp at the Citadel game was 83, one can only hope it’s that cool against Rice.

I plan to be at both games, just like I’ve been to the openers and early season games in awful hot weather the last five or ten years. You know it’s bad when they set up hydration stations in the concourses.

But me and you and most of the folks on this board being willing to sit there and make our own gravy on a sunny September afternoon is not really the issue. It’s more a question of how many thousand people will decide to join us to watch the Hogs play Rice or Georgia Southern.

We played day games exclusively in RRS for many years, including early September. The Citadel disaster, for one. Didn’t start playing night games until 1997. Somehow we survived.

Except that RRS now has enclosed north & south end zones & the double decked east side, such that there is no air movement so it feels much hotter than in '97. After lights were added & prior to ESPN dictating game times, the night games were not so bad.

We’re ready to return….we upgraded our tickets to the south end zone to get some shade due to the temps at the early afternoon games. The heat was oppressive and we needed some relief.

I remember when the first game of the season was about the third Saturday in September. When they went to an 11 game schedule we started on about the 2nd Sat. Our game against Stanford in 1970, the first 11 game season was played on about September 14 at night in WMS. It’s been only within the past 15 years or so we started on Labor Day—whenever we started the 12 game seasons. I know we played Texas in Austin on Labor Day once in the 80’s, but that was a special early start.

Football is just not meant to be played in the afternoon in the summer. It’s dangerous. But TV rules.

The year we played Texas on Labor Day was also the same summer it was 100 plus degrees for something like 50 straight days. Fortunately the heatwave had broken by the time we went to Austin. But the result was the same as it had been down there since '64 – Texass won.

Ricepig1, how do you know ticket sales are so bad. Is that information posted somewhere?