From the Auburn paper 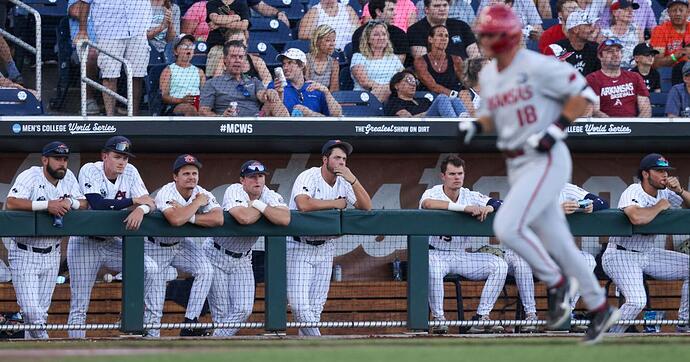 Auburn baseball's season ends in Omaha with loss to Arkansas

One of the best seasons in Auburn baseball history ended with a lopsided loss to SEC foe Arkansas in the College World Series in Omaha on Tuesday.

Auburn definitely surprised me this year with how they played. I think Thompson does a good job with those guys. I Tim Hudson does a great job with their staff, I don’t think they’re going away anytime soon.

Anyone who listened to the podcast knows I thought highly of them early in the year. Whenever a team loses a lot of close games like Auburn did last year, it often wins those close games the next year if a lot of players return. Auburn was about 20 runs away from being a No. 1 or 2 seed last year, but lost a lot of one- and two-run games and missed the postseason. I thought Auburn gave Arkansas its toughest series of the year during the 2021 regular season. Those Game 2 and 3 victories were hard fought.

It tells you a lot about the SEC West when Auburn is considered the fifth or sixth best program in the division.