From a former official

Dr. McGee is Ryan McGee’s father. He was a long time official and co-author of Sidelines and Bloodlines. 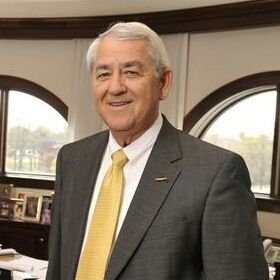 What about calling it a foul and taking ten seconds off the clock? We needed a little more time to at least have a chance to run two plays. I can’t stand AU and those cheating REFS!

If he fumbles the snap, picks it up then spikes it forward, it’s a foul and the 10 second runoff is correct. Since he spiked it backward, it’s a fumble. It’s actually a double fumble because the refs and Birmingham fumbled the call.

And the claim that Arkansas failed to immediately pursue the fumble is BOGUS. If you look at the play carefully, you can see Foucha (#7) dive for (and recover) the ball. Just because he was not close to the play is no reason to consider that his pursuit of the ball was not immediate.

Baumbastic, you are TOTALLY correct. In fact, when I read the SEC “response” with their myriad of references to rule bylines, that was my reaction. They basically said that in order for the decision to be reversed, we would have had to recover the ball IMMEDIATELY (their caps, not mine), and in the flow of a football play.

WHICH WE DID. Foucha immediately dove for the ball…muffed it towards our goal line…then when their #11 came to grab it Foucha scooped it in. Of course whistles were blowing so some players had stopped. But…so what?! Their explanation wasn’t that the whistle had blown so nothing matters. They say they couldn’t overturn it for the reasons stated above.

Making all of this a pile of stinky SEC bull@#$%.

Claim the win Arkansas. The league won’t recognize it. So what. We can internally.

We could have declined the penalty and saved the 10 second runoff. Not a big deal, but Sam needs a little sideline help. He had the right to be pissed and all over the whole crew, but if you wanted an extra 10 seconds for the miracle then decline the penalty.