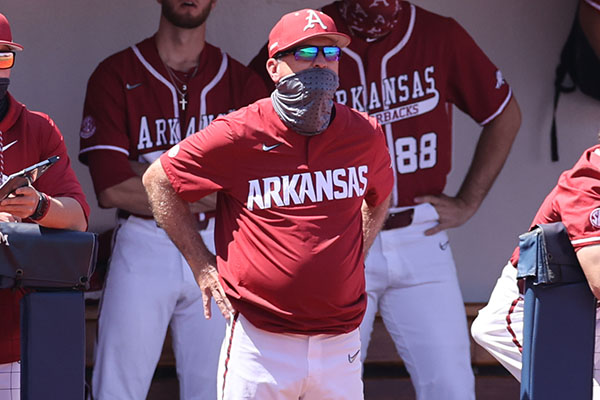 For the third consecutive SEC series, No. 1 Arkansas has a pair of nine-inning games scheduled for the same day.

Wow. That’s a bad break for the hogs.

Wow. That’s a bad break for the hogs.

I think it makes things tougher on Arkansas because it puts more strain on the pitching staff. Arkansas threw 28 innings over two days last weekend against Texas A&M, whereas South Carolina threw 23 innings over three days at LSU. Plus, South Carolina has had one more day of rest going into this week’s series.

The Gamecocks are going to be throwing their pitchers on normal rest. Arkansas was already not going to be able to do that, and this will cause some to pitch a day earlier now.

Both teams knew this was a possibility since early in the week. The forecast is bad in Columbia on Saturday. In addition to moving the baseball game, the Gamecocks also pushed their spring football game back to Sunday.

The strain to me depends more on who has to burn more pitchers in game 1 and game 2. We will need Bolden and Pallette to eat up some innings. And hopefully no or not much Kopps.

You expect a bigger SC crowd on Friday at 2pm or Saturday afternoon?

Why did LSU and SC only play 23 innings?

Two of their games were 7 inning games. I think that was because it was a DH on the 3rd day of the weekend.

Correct. That LSU-South Carolina series began on a Thursday, so the Saturday doubleheader had to be seven innings.

Maybe we can get a strong outing from Vermillion who should be rested. Maybe even a few from Noland as well.