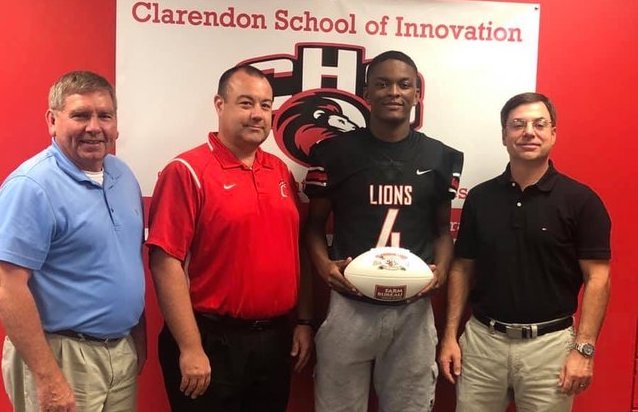 Wow, he needs a before and after picture. I wonder what his weight goal is? He’s putting himself in position to see the field by putting on good weight.

That’s a lot of weight to gain…hope it didn’t cost him some of his speed cuz I don’t remember him being a burner to begin with
.

I doubt it. I think this isa case of someone who has never focused on one sport and also ate three meals a day. A lot of kids will skip meals in HS.

I hope he can contribute, 200 lb is a very solid wide receiver especially if he has the speed…

I bet it is solid muscle with a bunch in legs and butt and still have his speed. Some guys get faster because they are trained properly and are able to further strengthen certain muscles that help with speed. Glad to hear he has gotten stronger!

I think in one of the summer camp posts, I mentioned E’Marion Harris & Devon Manuel both with significant weight loss. Might want to do a search but believe both are in the 330-340 range.

I can say Luke Jones looks awesome. He’s much thicker everywhere. I would guess he’s 320-330.

I’m pretty sure Ricky Stromberg is in the 315-320 range based on what I was told. He ain’t fat that’s fo sure.

All these guys I saw while attending summer camps on the Hill.

170-200? No big deal. That’s exactly what I did after getting married. That’s also when I made the switch from Offense to Defense.

Some of the younger O-linemen Football Insider Board

Hearing freshman Patrick Kutas is killing it in the weight room. To say the coaches are high on him is an understatement. E’Marion Harris is down to bout 340. Devon Manual is down to bout 331.

Sorry, wasn’t posted under a camp post. I made it separate but got the info from attending one of the camps.

Got to put a smile on all Razorback fans. Coach Briles has to be licking his chops. Studs moving the ball on the ground and in the air.

Great news! Even though, at my age, I should savor every waking moment, I cannot wait for our first FB game!!
I had to do a search for Kutas. Apparently, he was recruited for DL (?) and, his latest listing showed 6’6", 303. Sound about right?

Monster in the making. Got to keep them coming like in the OL.
The middle on defense is essential for success, especially in the SEC. Mobile, strong big men at defensive tackle seem to be in short supply.

Guess he is an OL. I was hoping he had transitioned to DL (as one recruiting article listed him)

Kutas is a OL. He was initially recruited as a DL but will play on the offensive side.

We really need to get Markis Deal.