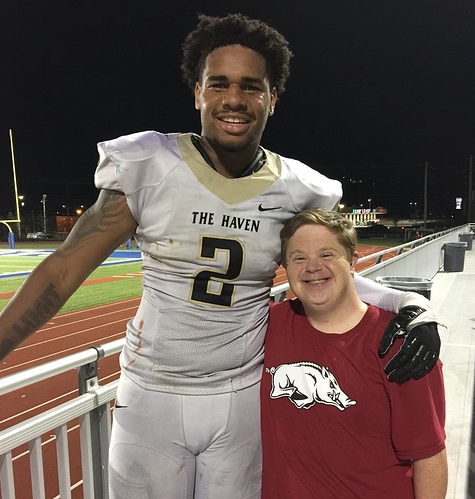 SO how do you feel about the odds of getting all 3 now?

And what about Crawford?

While wearing a UT bracket on his official visit here…I’m sure he’s working them, just not sure to where… 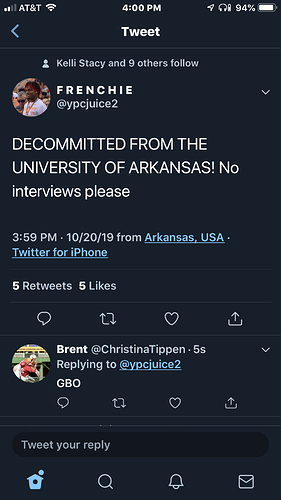 I don’t know about free fall.

Free Fall in my book

It hurts, no doubt, but all hope isn’t lost.

If you say so… how many we beating Bama by?

I figured all that stuff about him just waiting for his teammate to get an offer would turn out to be nothing.

He handled this pretty horribly. Shows a lot about his character. Feel bad for anyone who believed a kid was actively recruiting for the hogs while wearing Tennessee gear.

Things continue to look bad for chad. Guess we will get the new coach high again atleast… ugh…

I guess you better break out your checkbook.

My account is probably negative to be honest. Lol

Just don’t know what else they are going to do. No fan enthusiasm. Nothing to believe in. About to have a bad to horrible recruiting class. Just a sucky situation.

I get you don’t like Morris. That’s your right, but your stuff is getting old.

Whoops, sorry rice, thought you were replying to me.

I actually like Morris personally - you are wrong about that. I did not like Tito Bert as a coach or personally.

What I don’t like is getting embarrassed on a weekly basis on the field and losing recruits.

Unlike some in the media - perhaps you I don’t know - the program is more important than my personal feelings for any coach.

I didn’t know he was wearing Tennessee gear.

Welp, I hope we play him one day and make him wish he did commit for real if he did that.

Other than that, I don’t blame him for taking his visit and possibly being turned off by recent games. It’s up to the coaches and the team to cash in for these recruits and we’re not YET! But it’s coming!

One more thing Richard - all I did in this thread was report to readers we lost a 4 star recruit and comment that IMO that the program is in free fall. What’s wrong with that?

No different than you Reporting news and editorializing from time to time.

Yeahp, the entire weekend.
These guys just made the coaching staff look really stupid. Now they are making it even worse in twitter the way they are handling it.

The entire situation sucks. Chad can’t keep these guys committed. We will lose Dixon next id almost guarantee it. I wish chad could’ve worked out, but the writing is on the wall, no point in even trying to deny it at this point. I feel for HY, what a crappy situation he’s put in, already.